Beautiful colourful imagery – check. Thought out and touching story – check. Only DLC is an exquisite soundtrack album by Darren Korb – check. This must be a new game from Supergiant.

Pyre is the third game released by Supergiant Games, creators of the acclaimed Bastion and Transistor, two games I have an enduring love for. The basic premise of Pyre is that you are an exile in a strange otherworldly land. Rescued from starvation by a group who aim to free themselves by conducting arcane sports rites. At night. On the remains of otherworldly Eldritch horrors. From another dimension.

I have no idea where they got the idea from. Either they were simultaneously thumbing through a book on Aztec sports and human sacrifice, or someone played too much NBA Jam whilst listening to a Lovecraft audiobook.

Either way the premise is good. I’ve never been entertained by playing a basketball game (untrue, remember Game 2.0 at the Centre of Life? – G). Yet the ritual combat/game of Pyre (just called the rite in game) is entertaining. My initial thoughts were it would play like a basketball version of Bloodbowl, but it doesn’t. Different characters have differing abilities which dramatically alter your tactics for each game. You choose three of your companions to play in any rite trying to tailor your picks not just to what tactics you prefer and your opponent’s team composition, but to a larger Meta-game as well.

In the rite each team has a pyre it has 100 health. Every time a ball is thrown in (or more often jumped into) the pyre loses health. Each hero does damage to the pyre depending on their speed. The slower they are the more damage they do. Of the three players on the pitch only one can move at any given moment but you can instantly switch and pass the celestial orb (a ball that looks like a glass dragon ball) between your team mates.

You can temporarily ‘banish’ (remove) opposing players by casting out your aura or making your aura touch another player. Each player’s stats determine how large their aura is, usually slower players have larger auras Making them immune to being banished by running into opponents. Casting out your aura means firing it out in a line and hoping it hits an opponent.

Whoever is holding the ball loses their aura until they drop it, making them easy to tackle or banish. So they have to be crafty using terrain or well-timed jumps to their advantage. Each of the different playing fields have a different background and some unique terrain or environmental effect. A broken up ship, a tangled forest or giant movable ice pucks all help prevent the game getting stale. 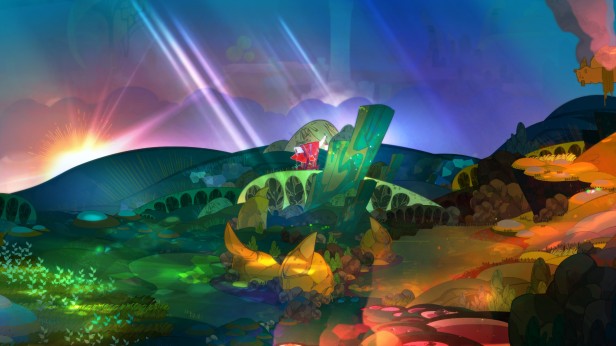 Players can learn up to 4 unique skills (from a list of 8) to customise their play style by increase their damage, changing the way there aura is cast or other tweaks.

The aim of the game (and your group) is to liberate itself from the Downside (the place you are exiled) via the rite. You do this by playing a short season of games then going to a season finale where, instead of a cup, one of your players in the rite is freed if you win. If you win the chosen character is whisked away so you can never play with that character again.

This mechanic is accompanied by the fact you can only choose to free a character deemed worthy. Which happens when you play with them for a while. This forces you to choose character which may be outside your normal play style or end up losing all they players you are ‘good’ with. Add in the character interactions and story’s in between rites and you may end up choosing who plays games based on a whole new metric. 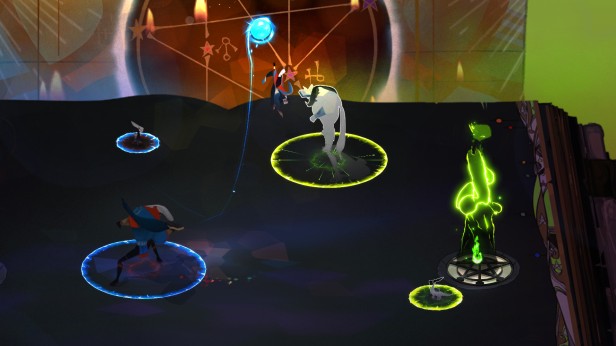 Should I try and free X even though they have a better life in the Downside then back ‘home’? What about Y? If I free her will she ever make peace with her sister who captains a rival team? Each of the games other teams have some story to them. Whether it is a possible romantic relationship with one of your players, family ties, or dark reasons for wanting to be freed to return home.

I have avoided talking much about the plot in order to prevent spoilers, but story is a strong point for Supergiant games. In Pyre all but one character speaks in an invented language called Sahrian which sounds like a Spanish-Latin mashup. Because of this most of the story is read by the player in a manner not to dissimilar to most steam visual novels. Even more reading is available via an in game book which covers a variety of rite related materials. 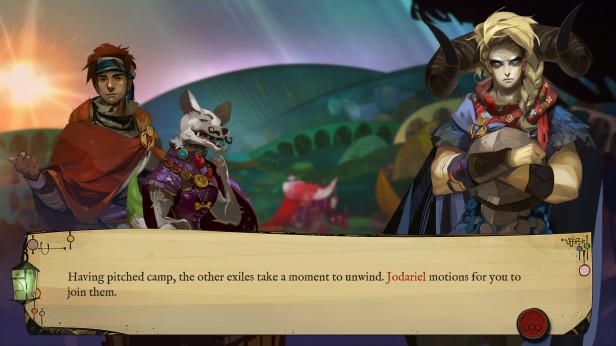 At times it can feel like there is too much reading. The optional reading via the in game book can be off-putting if you have just gone through a long conversation and you can occasionally miss an unlocked bio amongst its pages if you’re not too careful.

The combination of Eldritch basketball lovingly throughout out characters their interactions and the players choice on who the lose/set free makes for a great game. This review would have been concluded a lot earlier and perhaps with more positivity if it were not for one problem. A bug. 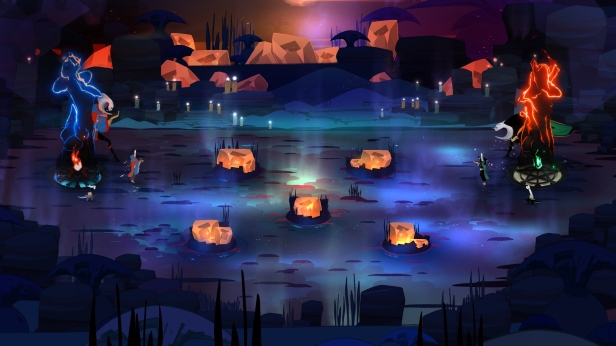 I will say now so as not to predigest you the reader, this bug is extremely rare. Despite the best efforts of myself and the developers’ tech support, my version of the game will stop auto saving randomly. This would not be a problem if the game had a manual save option, but it does not. Thankfully it is fairly obvious when this has occurred. However the feeling of getting thorough a long piece of dialogue (these fellows can talk) followed by a tough match only for it to not save and know I will have to redo that segment is not great.

The number of people who have this bug is probably in the single digits with me knowing of only one similar case. However as much as it has dampened my enjoyment of the game I would still recommend it to others. 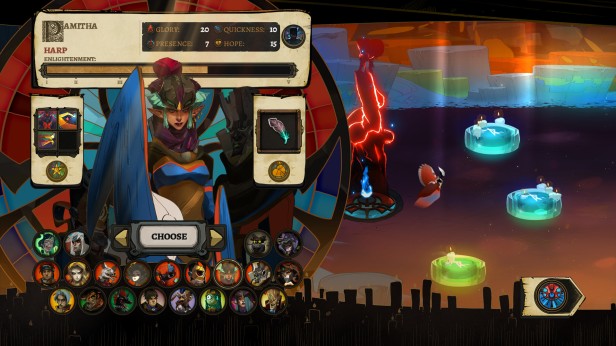 You can see the love they have poured into the art. You hear the emotions in every song and hear it in the language you will never understand but they created for the npc’s to speak as you read a translated text box (I mean who goes to that level detail these days). I feel the love and really enjoy the gameplay it’s only the one bug which affects my enjoyment.

One thought on “Pyre Review”