Nidhogg 2 is the sequel to 2014’s cult classic multiplayer duelling simulator that expands on the original game’s 1v1 combat with new arenas, new weapons and an entirely new art style. Players must reach the other side of the map, murdering their opponent who continuously respawns to attempt to stop your progress and do the same. The winner gets the distinct honour of bragging rights over their friends (and being eaten by the wurm) 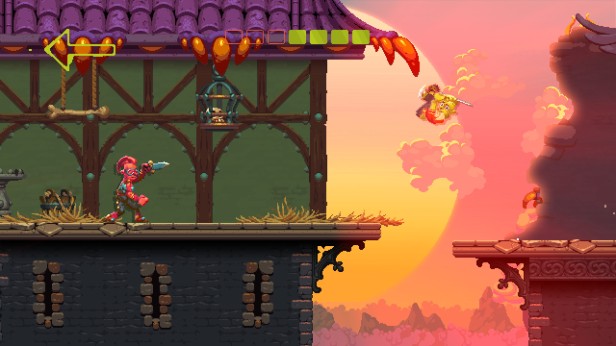 Simplicity is a powerful tool in competitive multiplayer games. Throwing players into head-to-head combat against each other is a great time, especially when the focus is less on remembering complex controls or abilities and more on simply exploding your friends into colourful gibs. Games like Towerfall: Ascension, for example, work wonderfully because their matches are fast-paced and the onus is on defeating your friends, rather than on how you defeat them.

Messhof leverages this simplicity in Nidhogg 2, crafting a lightning fast multiplayer game that’s as compelling as it is easy to pick up. Yes there’s single-player, yes there’s a campaign. But that’s really not where the fun is in Nidhogg 2. Single-player is serviceable at best – there’s nothing essentially wrong with it, heck it’s even a good place to learn the nuances of the game. But the AI can’t really trouble you after a couple of maps, which means there’s no real intensity to single-player duels. 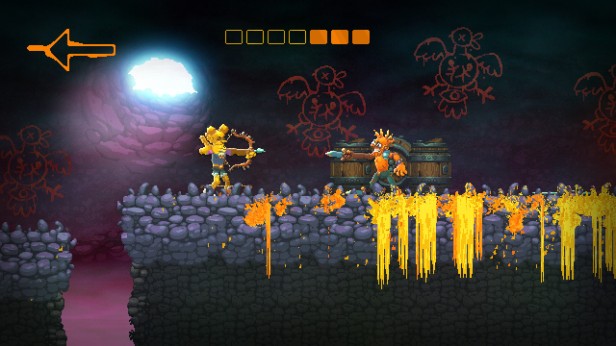 Instead, everything here is built around a fantastic multiplayer experience. Where it’s really easy to game the AI in single-player, the unpredictability of fighting your mates adds a lot to the experience. The objective, and how you go about achieving it, is as simple as it gets. You have to get to the other side of the level. Your opponent is trying to stop you. Every time you score a kill momentum swings and you’re able to advance forward.

The trick is that your enemy will keep respawning to stop you. If you’re killed the momentum flips and you’ll need to stop them. It’s a satisfying back and forth that frequently throws up hail mary’s, clutch plays and some pretty intense 1v1 duelling action. Nidhogg 2 gives you a handful of weapons to get the job done – rapiers, broadswords, shortbows, daggers and more are on hand to murder your enemy in a satisfyingly brutal manner.

If all else fails, you’ve always got the option of throwing your weapon at their head. Or pummelling your opponent to the ground and stamping them into a fine paste. It’s all about playing around the tools you and your enemy have. Each weapon (or lack thereof) have their own strengths and weaknesses. Figuring out what each one does and how it can be used is the key to pushing your way past the final screen.

This is combined with a smattering of different maneuvers and some really well designed hitboxes to give players a fairly wide range of options for dispatching troublesome foes. As well as sticking players with the pointy end you’ll be able to divekick, roll (which is also how you pick up discarded weapons when your hands are empty), jump and accidentally lunge unwittingly into the sharp end of your opponents weapon completely by accident.

There are generally two types of fights in Nidhogg 2. Either the ones that are over within a second or two of frantic, furious button mashing as players swing, thrust, shoot, throw and kick at each other in intense fury. Or the ones where you’ll face off over a chasm, through a door, or with one player holding the high ground, or sometimes even on a flat plane.

Constantly switching between high and low, moving back and forth and trying to psych out your opposite number is simple but tactically satisfying. The weapons themselves, both yours and your opponents, add a nice bit of variety to how you approach fights. They all work differently against each other. Broadswords have reach but are slow and can leave you vulnerable, daggers are quick but have very limited range. 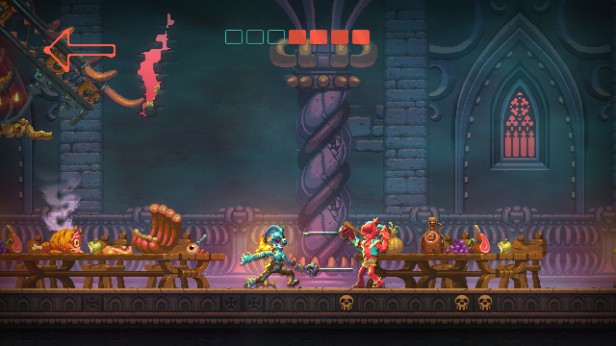 Coupled with the fairly well crafted levels, which can tilt battles by injecting obstacles, chasms and uneven ground into the mix, and you’ve got a simple yet tactically satisfying combat system. Played out at ludicrous speed. In motion when two players are facing off against each other it’s brilliant. Playing the game is nonstop fun. Heck, even watching two players have at it is a cracking time.

This is all wrapped in a strangely colourful package. A lot has been made about the complete shift in art style between Nidhogg 2 and its predecessor, from pixel art to a more cartoonish look. It’s certainly a very interesting move – the Homer Simpson-esque character models now have expressive faces and come in all manner of bubblegum inspired colours. Makes the exploding gibs look pretty cool though. And there just aren’t enough gibs in modern gaming.