Redeemer is a top-down brawler that casts players as Vasily, a former elite operative who used to work for one of the biggest Cybernetic Weapons Manufacturers in the world. After narrowly escaping being turned into a cyborg himself and spending twenty years attempting to find peace in an isolated monastery, Vasily’s past comes back to haunt him and he must fight his way to redemption. 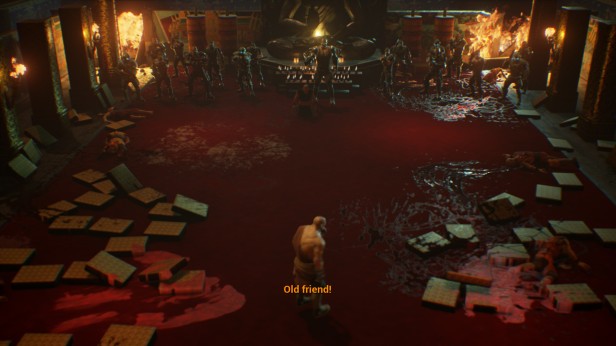 If that brief plot summary sounds a little bit ridiculous, that’s because it is. Redeemer embraces a gleefully over-the-top nature that permeates every part of its design. From the ridiculous narrative to the gore-laden combat, Redeemer is absurd. That’s not a knock on the game – it’s this absurdity that makes the game memorable and a lot of fun to play.

That plot summary is pretty much all you need to know about the story itself. Monks, cyborgs, mercenaries and corporate plotting – it’s all just window dressing that allows players to play out a power fantasy of kicking and punching their way through scores of armed goons and horrifying mutants. Nothing more, nothing less. And it’s a lot of fun to blast through a few levels or tackle one of the game’s arena maps.

Redeemer’s combat works to empower its players and make them feel like badasses. Starting out at a snow-covered monastery invaded by mercenaries, you’ll need to master a basic but satisfying combat system to beat your enemies into various bloody pulps. The game features what is essentially two-button combat – one punches, the other kicks. You string together combos by alternating between these two buttons.

Redeemer lays some complexity on top of this basic moveset. Jump attacks and charge attacks are both possible, as are gloriously brutal environmental kills on various pieces of scenery. You’re also able to protect yourself with dodge rolls, blocking and carefully timed parries. It’s nothing you haven’t seen before, but Sobaka puts it together in a satisfyingly violent package that recalls old school classics. 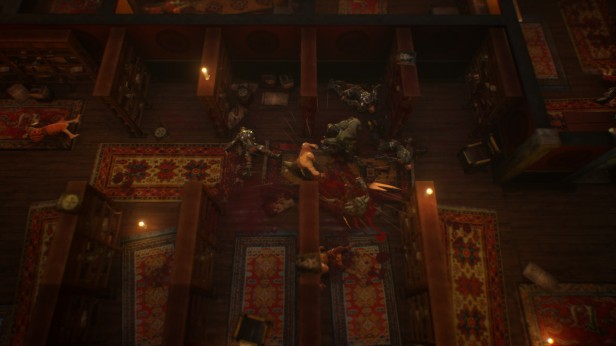 It’s the game’s weapon system that simultaneously makes things more interesting whilst also highlighting some of Redeemer’s minor frustrations. Vasily can pick up various weapons scattered across the game’s levels, as well as disarm opponents with the flick of the right stick (quite literally in the case of the mutant enemies). Weapons vary, ranging from melee weapons such as knives, axes, batons and such to pistols, shotguns, assault rifles and more.

Using weapons is satisfying. Melee weapons break easily and guns come with very limited ammo. Rather than be a frustration, this plays into Redeemer’s fast-paced action really well. When fighting scores of mutants or non-gun wielding mercs you’ll be having a blast as you quickly cycle through whatever weapons you can get your hands on, or tear from your enemies. You can also pick up and throw chairs, fire extinguishers and other objects at bad guys, which is never not fun.

For the most part this is how Redeemer’s core gameplay loop plays out. But there are a few long stretches of the game that see you facing off against a lot of gun-toting enemies, and this is where Redeemer loses some of its satisfaction. When the game focuses on melee combat it’s a great time. But when the enemies you’re facing are mostly armed with guns it grinds the pace to a crawl and forces you to play against the power fantasy that is Redeemer’s biggest strength.

You don’t feel like so much of a badass when you’re having to evade incoming fire rather than slamming mercs around. While a larger focus on gunplay is a natural progression of Redeemer’s gameplay, it’s something that the game could have done without. Boss fights similarly aren’t all that great, mostly revolving around endlessly dodge rolling and taking the odd swipe at an overpowered enemy who will thoroughly ruin your day if you decide to get too close. 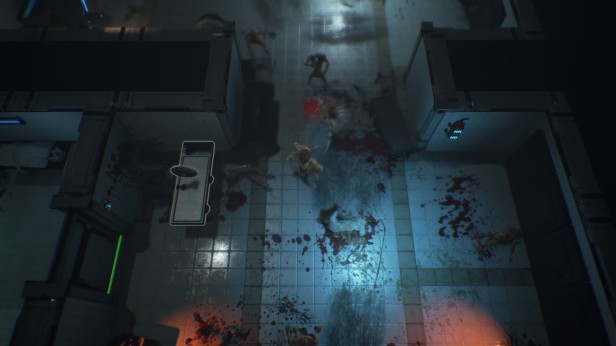 Luckily Redeemer doesn’t stumble too much. Less than a quarter of the game’s levels suffer from this problem and they’re mercifully not all grouped together. Before you know it you’ll be back to exploding bad guys in gloriously over-the-top fashion, either in the game’s 16 campaign levels or in Arena mode – a wave-based horde mode that takes levels based on those found in the story and tasks you with survival, which is a fine enough mode if you’re enjoying the core gameplay and want more of it.

There’s a good deal of enemy variety throughout the game and Redeemer is pretty good at keeping players on their toes. Mercs and mutants come in a variety of different shapes, sizes and attacks. You get a chance to learn how to deal with each enemy type before they’re mixed in with the rest, forcing you to adapt your strategy on the fly with each major encounter. It doesn’t drastically alter things, but it does help to keep things feeling fresher than if you were just running about mindlessly punching everything. 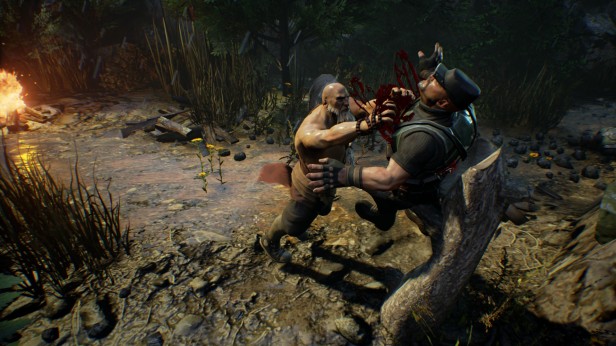 Graphically the game looks fine, with a nice variety of environments to play through as you progress through the campaign, which makes up for the fairly dull and standard enemy models. One thing you’re going to want to do, however, is to go into the menu and immediately turn off the motion blur, which causes everything around Vasily to go out of focus and really mess with your eyes. This blurring effect makes it incredibly difficult to focus your eyes on what’s ahead and isn’t a very pleasant experience at all.

What hurts the experience most, at least right now, is the game’s performance. My time with the game has been plagued by framerate stuttering. It’s not terrible and it doesn’t completely ruin the experience, but it is in the game and doesn’t really go away. I also ran into a few crashes, usually when the game was loading in a fresh horde for me to fight, which cost me a fair bit of progress and a chunk of change in the swear jar. Whilst I’m sure a patch is incoming to fix these issues, they’re present right now.