Tiny Trax is a slot car racing game with extravagantly designed tracks built around players in a VR space. The game puts you in control of a slot car against three other racers and tasks you with beating your competition through speed, skill, luck and the ability to keep your wits about you on a race track that is literally built around you, thanks to the virtual reality. 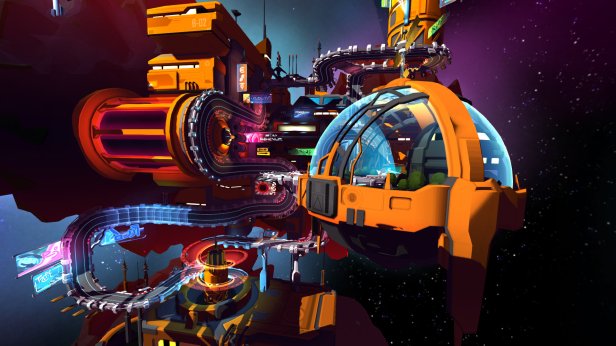 It should come as no surprise to anyone who has played virtual reality (or has read reviews on the subject) that the sense of presence offered by Tiny Trax is wonderful. What may seem like a gimmick at first glance, placing players in front of mental Scalextric tracks and thrusting them into races, is actually a really fun experience thanks to the level of immersion offered by virtual reality.

But great sense of presence in VR is becoming like graphical fidelity in AAA titles – noteworthy, but almost a given at this point. Luckily, Tiny Trax has plenty of other things going for it. Those tracks that stretch out in front of you are really well designed. Split across four different environment types, the way they twist and turn, getting closer and further away, lend themselves to a fantastic play experience. 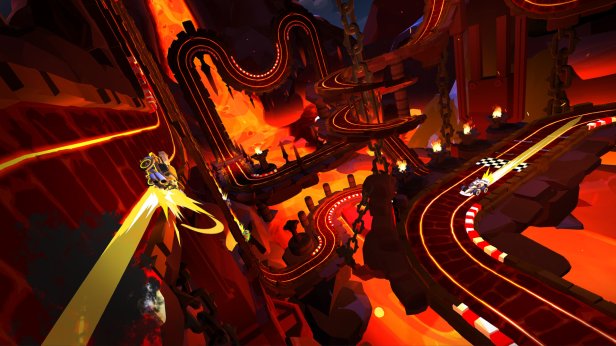 They also get more complex the further into the game you progress. Tracks start out small, giving you a chance to get used to the controls and gameplay style, but by the time you’ve reached outer space they can get pretty insane. Tracks become huge, sprawling things with tons of twists, turns, jumps and more to really keep you on your toes as you battle for first place.

This does present some issues. Seeing the parts of the track that are further away can be a challenge. Sometimes it’s obscured by scenery or parts of the track that are closer to where you’re standing. Other times it’s just hard to accurately see your car or tell which way a corner is going at a distance. You can push triangle to highlight your car, but when all of them are bunched together and they’re small and far away this can be of little help. 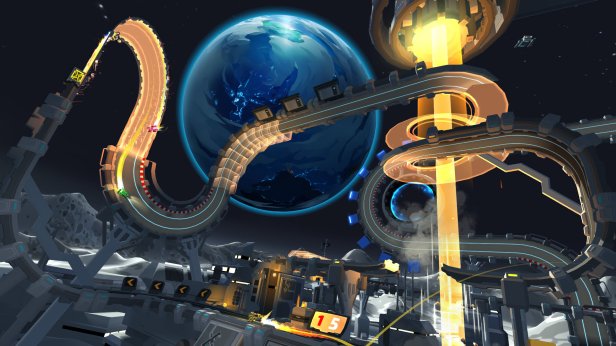 These are smaller issues wrapped in an otherwise satisfying racing experience. Tiny Trax is a simple game with simple controls. There are only a handful of buttons to learn, which keeps the focus of the game purely on the racing. There’s a learning curve here – this isn’t quite like any racing game you’ve played. Your perspective is that of someone playing with a Scalextric set, rather than placing you in the driving seat or floating behind the car you’re driving.

It makes cornering feel a bit weird when you first start playing. It’s easy enough to get used to after a championship or two, though. Once you’ve gotten into the Tiny Trax groove it handles like a dream. Cornering is something you’ll need to get right, too, as it’s tied into the all important boosting mechanic. Your car comes with a rocket boost that you’ll need to use tactically to get past your rivals and into first place. 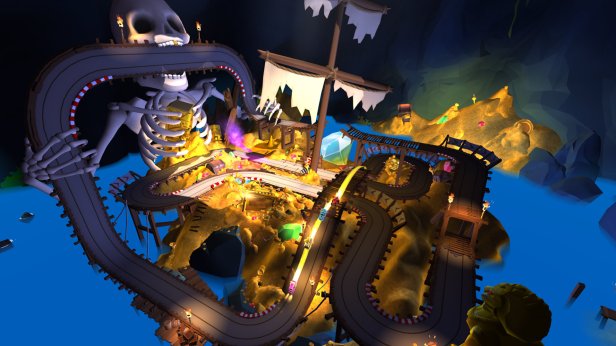 That’s how it’s supposed to work in theory, anyway. In practice boosting has little impact on any given race. It’s only when you’ve run out of fuel for your rockets that boosting actually comes into play. If you’re doing well you’ll never run out of boost – but neither will your rivals. It’s only if you mess up during corners that you’ll start to run low. Even then, it takes effort to actually run out of fuel during a race.

It makes boosting feel almost unnecessary. It rarely comes into play as the tactical gameplay mechanic that it clearly wants to be. Instead it’s just another button that you have to make sure you’re pushing while you’re trying to win a race. Only when racing the AI and deploying it while navigating a twisting corner does it have any effect on the outcome of a race. Unless you don’t have it, in which case you’re going to quickly fall behind. 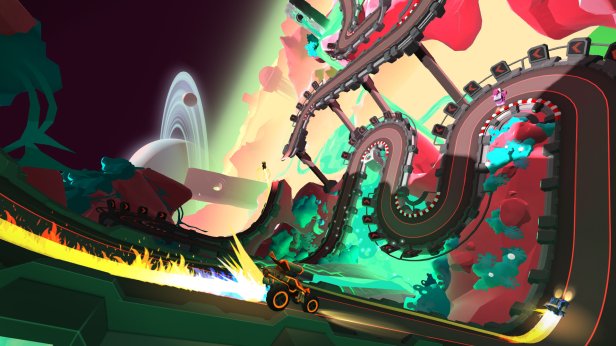 Regardless, Tiny Trax still has a satisfying gameplay loop. The AI is fairly on point during single-player races and will provide a stern enough challenge for you to overcome. Winning an offline championship or single race does eventually boil down to memory more than racing skill, however. After a couple of hours playing by yourself races begin to feel mechanical rather than fun.

Multiplayer is where this game shines, however. It brings the immersion and neat gameplay mechanics of single-player, but throws you against opponents who can just as easily make mistakes as you can. Racing other players makes Tiny Trax feel like a much more dynamic, chaotic game, which in turn makes for a much for fun experience overall.