Antihero is a turn-based strategy game that takes place on the dimly-lit streets of Victorian London. Players take on the guise of a master thief running a nefarious guild with the aim of controlling all the crime in the city. It couples strategic gameplay with a charming, cartoon-ish art style, an inoffensive period soundtrack and a tiny amount of Cockney voice acting. 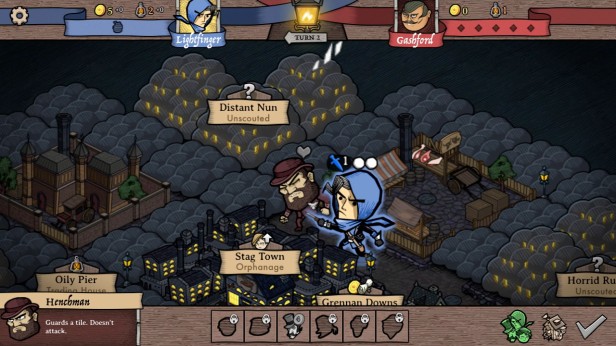 Antihero comes with three game modes – campaign, skirmish and multiplayer. These different modes offer players a variety of ways to interact with the game’s core gameplay. The objective of any match is to win by acquiring X amount of victory points from the map, which are accrued from a variety of sources – bribes, blackmail and completing missions.

Bribes can be bought from the resources that are “acquired” by players, blackmail sees players filling churches with street urchins and assassination missions require the murder of specific NPC’s that can be found wandering the map. Some maps do have additional victory point options, with the game making these bonus options mandatory in the campaign.

Gathering vital resources requires the use of child labour (aka street urchins) to raid resource buildings that have been scouted by a master thief. The game adds additional levels of complexity to its core gameplay by giving you access to a variety of different character types – thugs, for example, can block opponents, whilst gangs evict urchins or fight enemies.

Anithero’s campaign is a fairly short one. After a few introductory levels that teach you the basics of play, the game will probably take you a few hours to get through (if you’re good, more if you’re particularly unlucky). That’s on the standard difficulty setting, which will see you breeze through levels without having to worry about losing. Except for the final level, which will offer up a taxing challenge.

The story itself in Antihero is pretty basic and predictable. That isn’t necessarily to the game’s detriment – the gameplay is rock solid and it doesn’t really feel like it needs a grand story or deep character development. In some ways, a deeper narrative would actually be at odds with the cutesy cartoon-y sprites in the game. The story does end with a promise of more adventures, probably taking the form of DLC in the near future.

Skirmish mode features hotseat multiplayer, though it’s mostly for players who want to play a quick match versus the AI without diving into the campaign. This mode also gives players the option of choosing a new master thief skin, with enemies defeated in the campaign adding to the selection pool. A selection of Victorian literature character skins is available as DLC. 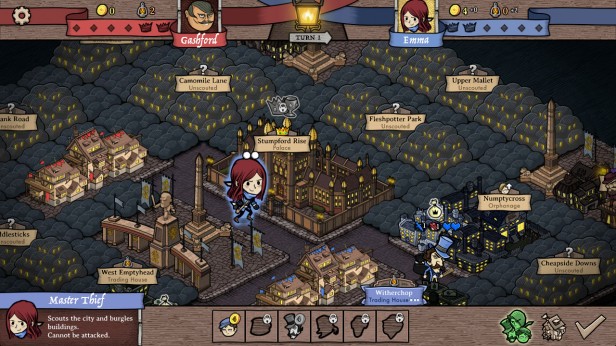 Online multiplayer pits you against either a random player or a friend in a one versus one match. This mode gives players the option of having a “live” or “casual” match. Live matches see you take on a player in more “standard” online multiplayer – playing a game out in one sitting. Casual allows turns to pass at a slower pace. Players can safely exit the game and will receive emails when their opponents have completed their turns.

Both skirmish and online multiplayer use the same maps from the campaign. Foreknowledge of each resources locations are prevented by a semi-randomisation of positions when each new game is started. Antihero still quickly gives you the feeling that you’ve played the same map before, though, especially on maps with special victory conditions whose positions remain fixed.

This feeling of deja vu when playing through levels isn’t helped by the fact that you’ll start each match the same way every time you play. You’ll generally be making the same moves in the beginning. While the mid and end games may vary, due to special objectives or opponent strategies, after 7 hours of play time each game has begun to feel the same.

Antihero is an enjoyable game and I’ve found myself often diving into it when I’ve got a few minutes to kill. Unfortunately it lacks that killer hook that would get me invested and playing it more rigorously. Though I’ve been enjoying the casual multiplayer matches I’ve started while reviewing the game, and will finish them, I don’t see myself starting up any new ones.

Antihero reminds me a lot of Hero Academy, a game I played a lot when it was first released in 2012. It was initially fun to play against friends, but we all quickly drifted away from the game, leaving plenty of matches unfinished. That game had a random element to it that helped make it feel less repetitive, something that Antihero is missing, and that even new game types or maps could do little to change.

Antihero is a fun game that is well worth its cost. Picking it up with a friend or two is a good way to get more enjoyment out of the game and prolong its replayability.