Nex Machina is a fast-paced twin-stick shooter born from a collaboration between Housemarque (Resogun, Super Stardust, Dead Nation) and Eugene Jarvis (Defender, Smash TV). The game is set in a future where Humans are unable to look away from their portable devices and machines have risen up and begun exterminating all life on Earth.

Using the term “fast-paced” to describe Nex Machina scarcely does the game any justice whatsoever. This is a game where, upon hitting start, you’re immediately thrust directly into action – thrown in at the deep end and told to swim or die. Nex Machina is all about blisteringly intense action, exploding voxels and getting huge scores posted on various leaderboards.

It takes a little getting used to. This is mostly down to the fact that you’re simply tossed into the game and basically told to get on with it. Luckily the controls are intuitive enough. Move with the left stick, fire and aim with the right stick, things start exploding in a face-melting colour palette. Nex Machina does well enough to keep its controls and gameplay relatively simple.

It’s a simplicity that is surface level, existing so players can easily pick the game up and achieve success. There’s a lot of nuance just below that surface. Multipliers play a huge role in getting you further and further up the leaderboard. The six worlds that you’ll blast your way across are littered with Humans that you must save. They wander around levels frustratingly oblivious to the warzone around them.

You need to save them before they’re exterminated. This presents a unique challenge to Nex Machina’s gameplay – staying away from your robotic antagonists is the best way to actually make it through a level, but you’ll need to take risks to save all of the Humans and thus increase your score. Levels will also contain bonus enemies that can be killed for extra score.

Each world is also jam packed with secrets to discover. There are hidden Humans to save, hidden levels to find and so much more. Finding these secrets can be challenging. Everything is happening at such a terrific pace that it’s easy to miss smaller details in levels. It takes a lot of replaying (or a lot of luck) to find everything the game has hidden for you. Luckily, Nex Machina has such a fast-paced, addictive gameplay loop that you’ll be glad to have just “one more go.”

Beating the campaign on Rookie mode (the game’s lowest difficulty setting) will take around an hour. There are five difficulty settings altogether, with Rookie serving as the best place to hone your skills and learn the various stages in the game. It’s not easy by any definition of the word – in fact, what makes it the “easiest” of the available difficulty options is that you have access to an unlimited number of continues. 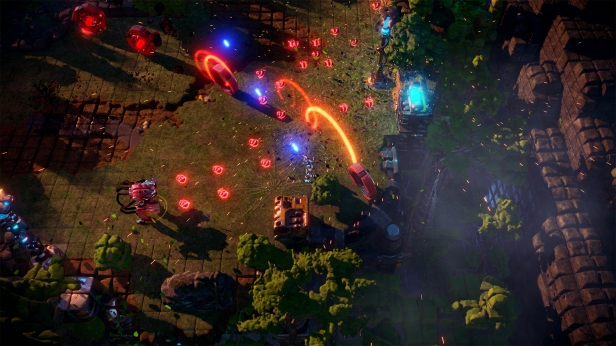 You basically have five lives to make it to the end of any given world in Nex Machina. Lose them and you’ll need to use a continue to keep playing. Using a continue resets all your equipment and power-ups. Crucially it also resets your score to 0. To make any kind of impact on the leaderboards (against your friends or otherwise) you’re going to want to make sure you don’t actually use any continues.

Raising the difficulty doesn’t just make enemies hit harder and take more damage. There are a number of modifiers tied to each setting that can fundamentally alter your approach to the game. At higher difficulty levels the game will get faster, enemies will begin to fire “revenge bullets” when they die, continues will be restricted and there will be a variety of other delightful touches that keep the game fresh and interesting as you seek out greater challenges.

Outside of “arcade mode” (which is the game’s campaign setting) you’ll also be able to tackle worlds individually, play with a friend in an awesome local co-op mode or dive into arena mode. Arena mode adds extra rules to otherwise standard runs – presenting you with a variety of scenarios such as time trials, speed increases and more. You’ll be awarded medals depending on your performance here.

These medals award players with currency that can be used to unlock more levels or cosmetic upgrades for your character, changing the colour of your armour or bullets for example. Local co-op needs more of a mention than a simple throwaway sentence in the middle of a paragraph. It’s fantastic. It takes a game that is already incredibly frantic, fast-paced and intense and kicks it up several gears.

This is all packaged inside a great looking game that runs at a rock solid 60 frames per second, which is an important feature for a game as fast as Nex Machina. Levels are really well designed and will constantly keep you on your toes. There’s also a great deal of enemy variety, with new enemies coming at you at a fairly even pace to ensure gameplay never gets old. End of level boss fights are pretty special too, although the last boss does leave something to be desired.

Nex Machina is a hard game to put down once you’ve gotten into the swing of it. Once you’ve finished one run and you’re deposited back at the menu, some combination of the awesome soundtrack and the sheer adrenaline pumping through your body will have you practically screaming for more. While it is admittedly light on content, it’s so effortlessly repayable that you won’t notice one bit.