Farpoint is a first-person shooter built for virtual reality, casting players in the role of a shuttle pilot who is tasked with picking up a pair of scientists from a space station. The scientists are returning home after a few months studying a strange phenomenon, which turns out to be a wormhole that quickly pulls the station, them and you in. Once on the other side you crash on a planet and set off to find the two scientists on this strange new world.

Remember when you and your friends used to run around the house/streets pretending to play some kind of shoot ’em up (something like cops n’ robbers)? Farpoint remembers. After an October launch that showcased what VR could do with a series of shorter proof of concept experiences, we’re now starting to see some fully fledged games coming to the various systems.

Farpoint is a full-on first-person shooter, with a campaign that lasts around four to five hours with both challenge and co-operative modes to keep you playing once you’ve finished that. It’s fully playable with a Dualshock 4, but when played with Sony’s newly released Aim Controller it’s a masterpiece of immersion, allowing you to experience an FPS like you’ve never experienced one before. Here I’ll be reviewing the game rather than the controller (for my full thoughts on the aim controller check out the podcast later this week).

The game itself is a fairly standard corridor shooter. Farpoint immerses you in its alien landscape exactly how you’d imagine a VR game would, with lovely scenery and the usual impressive sense of presence that comes with virtual reality. After crashing on the alien planet you take your assault rifle and set out on the dangerous trek across an unknown environment, searching for the survivors.

And that’s about it as far as the story goes. It’s serviceable at best, giving you just enough of a push to keep the main character moving forward. It’s decent, but also quite a shame. The facial animations are top notch and the voice acting is surprisingly excellent, but it’s sort of wasted on a story that you’ve seen a hundred times before. Not great, not bad just…there (albeit with a truly terrible ending).

Where Farpoint shines is in its combat. Mostly. The first hour or two pitch you into battles against the alien creatures that dominated the marketing campaign. Small spider-like monsters that totally aren’t facehuggers, bigger spider-like monsters that spit acid at you and the like. Fighting these enemies sees the game at its weakest, exposing some dodgy AI and suffocatingly linear level design.

If one of the smaller creatures jumps past you, it’ll scurry back in front of you before attacking again. This isn’t out of consideration, of course, but rather because the PSVR needs you to always be facing forwards, so enemies need to constantly be in front of you. Levels similarly offer noticeably little exploration and no real tactical options beyond keeping the bad guys in front of you and strafing or running backwards to avoid damage.

In its opening chapters, Farpoint relies entirely on the spectacle and presence of virtual reality to keep you interested. Much like its story, these first hours are neither good or bad. They’re just…there. It’s only once you’ve pushed past the first areas and onto the next set of enemies that the game truly begins to start firing on all cylinders. The next enemies, you see, start shooting back.

Once you’re engaging bad guys that are shooting at your rather than limply bull rushing towards you, Farpoint starts to draw you in. Combat is truly exciting and the possibilities for how you can approach first-person battles in VR begin to open up. Whilst still fairly simplistic for its entire running time, Farpoint’s gun battles feel exhilarating. Being able to look about, physically lean in and out of cover and just generally being right in the thick of the fighting makes this an awesome experience.

The AI of these enemies does a better job of keeping you on your toes. They do still have a habit of behaving illogically, but their efforts to move between cover and attempts to flank you create a compelling experience (when they’re not trying to fire through walls or infinitely running back and forth). Later levels are better set up to make you feel entrenched. Taking cover and exchanging fire with the robots and aliens of the latter two-thirds of the game truly make you feel like you’re standing in the middle of a first-person shooter.

In fact, the later part of the game feels almost entirely divorced from the first part. The first few levels feel drab and kind of dull, highlighting Farpoint’s weaknesses rather than accentuating its strengths. The later levels feature more engaging gameplay, better designed levels, more compelling enemies and some really well designed set pieces that put you right in the middle of some pretty great sci-fi action. 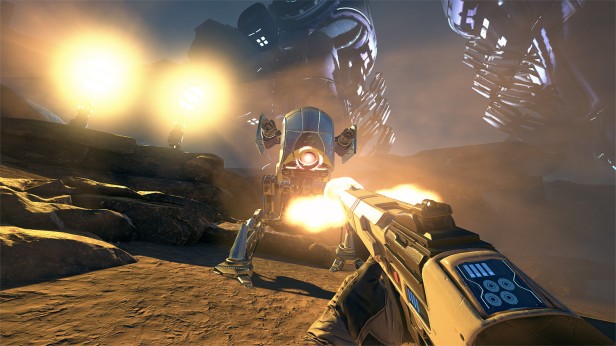 Once you’re done with the campaign, Farpoint still has plenty to offer. Co-operative missions allow you and another player the chance to tackle specially designed scenarios. While the animations of your partner don’t look smooth, that’s more than offset by how great it is to run through these missions with another player at your side. The game also offers a challenge mode that sees you racing against the clock through the campaign levels as fast as possible, racking up points by killing enemies.

As a first-person shooter, Farpoint is serviceable. As a true first-person virtual reality shooter it’s a very encouraging starting point. As a proof of concept for Sony’s new aim controller peripheral it’s a revelation. The gameplay is a step back when compared to other non-VR shooters. But it offers an immediacy and sense of presence that you can’t find in any other first-person shooter on the market.

While it gets off to a fairly shaky start, Farpoint is a solid game. The story never really rises above your run of the mill sci-fi stuff, despite some really good voice acting and some great facial animations. There are some noticeable flaws in the game’s AI and the levels aren’t exactly inspiring. But this is still a fun, solid first-person shooter that, when combined with the aim controller, is a must play for anyone with a Playstation VR headset.