Flinthook is a fast-paced platformer with light roguelike elements that tasks players with becoming the greatest pirate in space. You fly through the cosmos raiding other pirate ships for loot, relics and lore while attempting to find valuable bounties to take down. You need to do all of this armed only with a blasma pistol, a hookshot and a belt that allows you to slow down time for brief moments.

Flinthook takes some time to get used to. Once you’ve managed to get to grips with its controls it can make you feel majestic, using your hookshot to zip between its many grappling points and zip around blasting enemies into oblivion. There is a learning curve, however, though it doesn’t stem from the controls themselves, which are fairly straightforward. The learning curve comes from one specific control – tying both movement and aiming to the same analogue stick.

It feels quite awkward at first and, although it’s something that you’ll get used to in due course, there is an element of that awkwardness that never goes away. When you’re faced with boss fights or enemy encounters that require you to remain airborne it can be really tricky. You’ve essentially got to keep moving away from enemies and hazards while aiming yourself towards them. These occasions are rare and don’t detract from the game overall, but when they crop up they can be infuriating.

One specific boss fight will have you screaming bloody murder at your inability to move and aim independently. (there’s also an evade button listed in the controls that doesn’t seem to actually do anything at all). Aside from these sparse moments, Flinthook is masterfully well designed. There’s an incredible amount of satisfaction to be had becoming a gravity defying badass and the controls and levels are designed to enable this constantly.

Even when the game’s inherently high challenge is kicking your teeth in, you’ll still be having a great time. It took me a lot of runs to conquer the game’s second boss, but at no point did I ever entertain the thought of quitting or even putting the game down. It’s just too much fun to play, constantly pulling me back in for one more go. Flinthook definitely occupies the platforming equivalent of “just one more turn” and will have you coming back time and time again.

What helps in making the game effortless to learn and master, aside from some very simple controls, is the equipment. Flinthook kits out its protagonist with a few pieces early on and then never deviates. A brief tutorial level will equip you with a blasma pistol, hookshot and chronobelt and these are the tools that you’ll be using for the rest of the game, making their mastery nice and straightforward. Gameplay has a really great flow to it that you’ll appreciate each time you embark on a run.

As your skill and knowledge of the game increases you’ll never have to get used to new weapons or abilities to progress, which is incredibly helpful in mastering the challenges the game throws at you. Enemy variety hits a sweet spot between repetitive and overwhelming. There are just enough different enemies in Flinthook that you won’t find yourself constantly running into the same ones, but not so many that you’ll constantly be having to take damage through excessive trial and error. 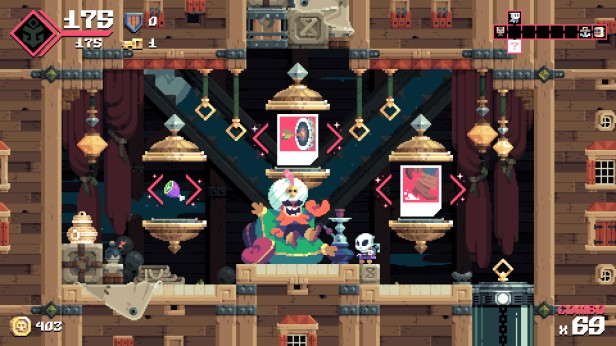 It’s not all about skill in the moment to moment gameplay, however – Flinthook also features an incremental upgrade system that allows you to unlock and purchase perks between runs that stick with you between deaths. By finding special tokens in chests you’ll be able to bolt a surprisingly varied number of perks to the protagonist, tailoring him somewhat towards your own play style. You can only equip a finite number of perks at any one time, so you’ll need to make choices about what’s useful to you. And boy are there perks for everything.

You can upgrade your health, increase your durability, maximise your damage output and even make changes to how your equipment works by having your blasma pistol shots bounce or increasing the range of your hookshot. These are just a few examples among many, but they should give you a good indication of the breadth of options available for increasing your effectiveness while raiding pirate ships. Brilliantly, you can also find these perks in chests mid-run and equip them immediately, though they only stay equipped for that specific run. Though it has to be said that some perks are far more useful than others. 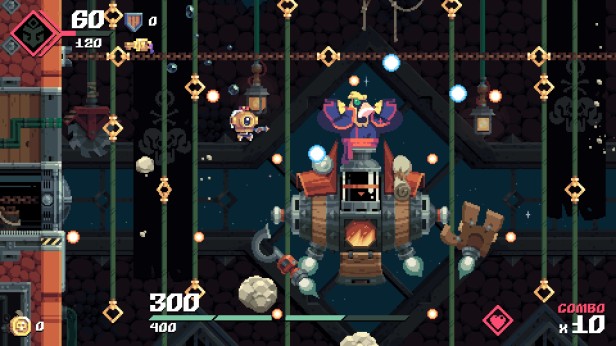 Maps, which are randomly generated each time you enter them, are grid-based. Select one of three targets and you’ll crash through the roof via your anchor and need to explore to find a golden treasure chest. Once you’ve plundered the contents you can call your anchor in and move on to the next target. Between start and finish are a series of rooms that could contain anything from enemy encounters to platforming obstacles, loot, vendors or collectibles, which take the form of the game’s lore and some relics, the purpose of which I’ve yet to discover.

Thorough exploration can yield big rewards so it’s generally a good idea to explore every room before vacating. Each level also comes with various modifiers, which you can see before selecting them. While I’m not clear on what the purpose of every modifier in Flinthook does (and the game doesn’t seem to want to spell it out for me), I’ve been able to decipher the meaning of a few of them. This is helpful in locating ships that have extra loot or vendors or avoiding ships with excessive enemy encounters. It would be nice to know what everything does, however.

All of this is backed up by some great pixel art that features some pretty cool animation work. Flinthook’s protagonist has a lot of neat flourishes and, between the platforming, combat and zipping about the place with the hookshot, it all combines to look really great in motion. The soundtrack is killer – with high energy chiptune fitting the look and feel of the game and doing a great job of matching the high energy, lightning pace of the action taking place on screen.

While there are some strange controls to overcome, Flinthook is a really great time. The fast-paced action and easy to learn controls combine brilliantly to create a game that is endlessly replayable and infinitely satisfying to do so. Even if you get stuck trying to fight your way past (or to) a particular boss, you’ll be having so much fun doing so that it barely registers that you’re stuck at all.

Combine that with some well designed levels and an upgrade system that makes you feel like you’re making progress regardless of dying and you’ve got a great game. In no time at all you’ll feel like a badass – flying around levels with grace and speed, blasting the various enemies in an elegant display of almost balletic carnage. Flinthook sucks you in until you look at your clock and realise it’s 2AM and you’ve been playing far longer than you thought.