A Rose in the Twilight is a macabre 2D adventure/platformer set in a castle frozen in time and robbed of colour, save for blood. Players take on the role of Rose, a young girl with no memory of the calamity that has befallen this place, and must make use of her power to absorb blood, which can be transferred to otherwise static objects to unfreeze them from time.

A Rose in the Twilight plays out exactly like a fairy tale. Not the one’s we’re used to, mind you, like the Disney movie remakes. I’m talking about the Hans Christian Andersen fairy tales that were filled with death, dismemberment and tragedy – fit for scaring the crap out of kids and breaking their hearts as much as teaching them life lessons. The story of Rose and the giant stone golem she befriends is filled with horror, mystery and sorrow. It’s bloody magnificent.

As the story goes, the castle has been smashed to pieces by a huge growth of thorns, which have drained the world of colour and frozen everything in time, save for anything imbued with blood. Rose awakens at the start of the game with a rose attached to her body that she can use to absorb blood, transferring it to nearby objects to unfreeze them. The golem does the heavy lifting – it can carry Rose as well as lift or throw heavy objects. It’s your classic video game team-up basically. 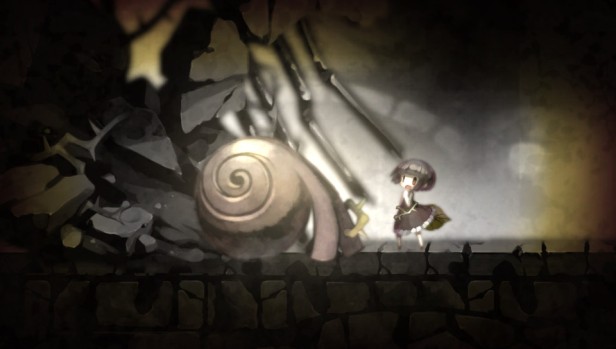 From there you’ll plunge yourself into the castle. The story is told without words, relying on the game’s visual presentation to tell a deeply sorrowful, tragic story that splits its time between the past (via Blood Memories you collect) and the present. Blood Memories play out like stage plays, heavily stylised red and black sequences that show you how someone died or snippets of Rose before whatever disaster struck. They are not fun happy times.

Within minutes I could tell that I had formed some sort of attachment to Rose, because I was forced to watch her die. Death and experimentation are a part of a lot of adventure/platformers – trying new things to solve environmental puzzles is just how game’s like this work. A Rose in the Twilight goes one step beyond, incorporating Rose’s deaths into its narrative and using them to form an emotional bond between player and player character.

It works too. Aside from the usual “oops I just threw myself into a pit of thorns” type deaths there are…other types. I won’t go into them for fear of spoilers and reducing their impact. But there are some incredibly harsh moments to face while playing A Rose in the Twilight. So harsh I found myself contemplating what the game was asking me to do and impotently refusing, before accepting the inevitable and feeling a little part of me die inside as I unlocked another section.

Playing through the game itself requires you to switch control between Rose and the stone giant. Both are integral to solving puzzles and traversing each of the game’s levels. Switching between them is quick and easy thanks to the game’s intuitive controls. Within a few minutes of meeting the golem you’ll have a hang of it and it won’t take very long at all for you to master them. 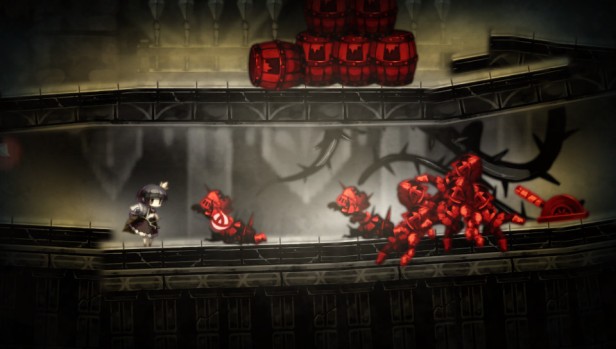 Not that this mastery comes in particularly useful. At least not during the game’s first half. You’ll spend the first 2-3 hours of A Rose in the Twilight brushing up against very basic, easy to solve environmental puzzles that produce little in the way of challenge. There are precious few moments where the game will even require much thought at all, which sees A Rose in the Twilight come off as a bit dull from a gameplay perspective, despite the excellent narrative and presentation.

This is thrown into sharp focus during the game’s latter half. The second part of A Rose in the Twilight sees the game come alive and really start firing on all cylinders. Where puzzles were basic and barely required engaging your brain before, the later sections of the game feature some excellent puzzles – puzzles that require precise timing, puzzles that span multiple rooms and puzzles that generally just do a much better job of engaging, surprising and delighting players.

It’s not that the first part of A Rose in the Twilight is bad – more that it’s very average, but comes off worse when the game shows you what it’s really capable of. All the excellent storytelling and the beautifully haunting art in the world can’t save the first couple of hours of A Rose in the Twilight from feeling a bit lifeless. Push through those first two or so hours, however, and the game shows its hand. Unfortunately, just as the game is at its absolute best is pretty much where it comes to a close.

While the main portion of the game clocks in at around 4-5 hours, you can squeeze a lot more out of it thanks to hidden Blood Memories and endgame content. Finding your way up to the more deviously placed Blood Memories can be a lot of fun (if environmental puzzle solving is your thing), adding another hour or two to the experience, depending on how stuck you get. These Blood Memories are well worth finding as they fill in the lore of the world you find yourself stuck in, and their black on red presentation is delightfully macabre.

The game’s stylised art style looks fantastic, lending the game a moody, oppressive and downright depressing tone that fits it like a glove. This also lets the game easily highlight important objects or places with a bloody red, that sits in stark contrast to the rest of the game. The only issue comes from the background and foreground occasionally being hard to distinguish from one another, which can cause some deaths as you wander into a nest of thorns you didn’t realise could kill you, though it’s a minor inconvenience thanks to a well designed checkpoint system.

A Rose in the Twilight continues Nippon Ichi’s excellent run of games that seem to exist specifically to torture young girls. The game’s nightmarishly twisted fairy tale is fantastic, weaving a mysterious narrative through use of minimalistic, visual storytelling and forms a strong emotional bond between Rose and the player. The visually haunting art style plays into this, setting a sombre tone for the rest of the game to follow.

Mechanically, however, the game can feel a bit lacklustre. While the controls and general gameplay are sound, with controls that are easy to learn and master, you’ll need to push through some fairly standard, average environmental puzzle solving to get to anything that will feel engaging. It’s a shame, because once you reach the second half of the game and it starts firing on all cylinders it can feel great, but it leaves you wondering why it waited so long to show you the good stuff.