Reviewer contributed to this game on Kickstarter

Yooka-Laylee is a 3D platformer with a nostalgic edge, even going so far as to promote itself as a “Rare-vival” during its 2015 Kickstarter campaign, thanks to the presence of several ex-Rare employees at the newly formed Playtonic Games. The game itself follows anthropomorphic duo Yooka (a lizard) and Laylee (a bat), who team up to collect the sentient pages (Pagies) of a rare and powerful book before the villainous Capital B (a capitalist bee) can create a book monopoly.

As an enthusiastic backer of Yooka-Laylee’s Kickstarter campaign, I was very much looking forward to Playtonic’s attempt at reviving the 3D platforming genre. I followed each update with anticipation as I eagerly awaited the game which would (hopefully) update the 90’s platformers I had grown up with for the modern era. With the creation of Yooka-Laylee Playtonic have, for better or worse, accurately recreated a 3D platformer from the late 90’s.

It pretty much falls into the “for worse” part of the equation.

Yooka-Laylee may well have been created and launched in the late 90’s era that it imitates. This is great for people looking to play the type of game that the industry left behind almost two decades ago, but it’s not so great for anyone looking for a good gaming experience. When the game’s that Yooka-Laylee is aping were released three-dimensional gameplay was in its infancy, with developers still struggling with the basic concepts of a brand new way to create games. 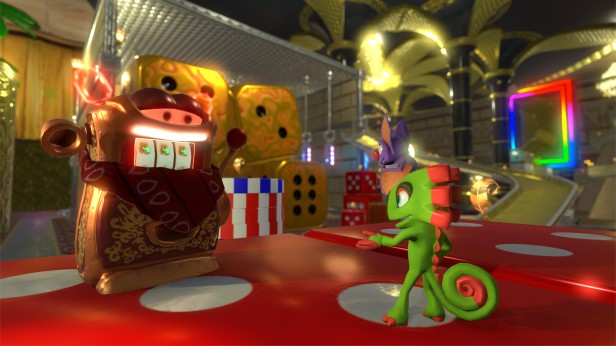 These are problems that the industry as a whole managed to figure out in the intervening twenty years. Unfortunately for Yooka-Laylee (and anyone who plays it), Playtonic have decided to create a game as if the last twenty years didn’t happen. Yooka-Laylee is a 90’s platforming revival – complete with all the dodgy mechanics, terrible movement and horrific camera that your nostalgically affected brain probably doesn’t remember.

Yooka-Laylee is a chore to play from start to finish. Right from the off you’ll find yourself fighting with a camera that seems to think it knows best which way to point, thank you very much. It’s almost unbelievable how utterly useless the right analogue stick is for aiming the camera. Trying to move the camera where you want it is like a poorly implemented quick-time event – you’ll spend nearly as much time wrestling with it as you will moving and jumping.

Unless you just give up on it. It zooms in and out seemingly at random, constantly moves of its own accord and at times simply doesn’t move the way you’re pointing the analogue stick. I’m honestly baffled how this wasn’t flagged as an issue pre-release, other than it’s perfectly in line with the experiences I had as a teenager playing platformers in the days of yore. And that’s when it hit me – this terribly designed camera was on purpose. It’s not broken or buggy, it’s the game running as it was designed.

It might seem like I’m focusing a great deal on a single part of Yooka-Laylee’s design. Truth be told it’s the perfect example of how nothing in this game feels like it works properly. Camera issues also have a knock-on effect to the rest of the experience – you try making even the simplest of platforming challenges when you’ve got a camera that thinks the mountains in the distance make a much better view than the platforms you’re trying to jump between. 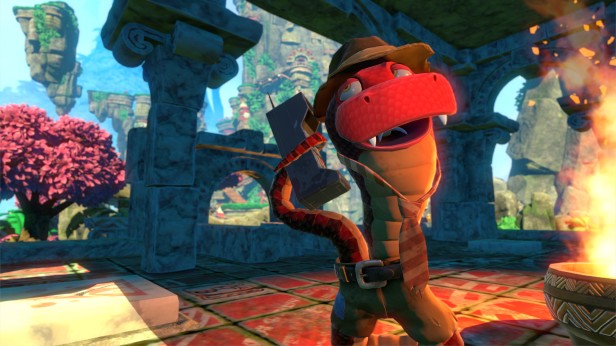 Yooka’s movements are equally unpredictable, again another relic from an age of platforming gaming had left behind. Clumsy is probably the best way to describe it. On its own the movement isn’t too bad – it feels a little bit floaty, but manageable. The problem is that once its combined with that horrendous camera you’ve basically got a recipe for disaster.

Combat is similarly impacted by the camera without every really being a bother. In fact, it’s so easy it’s a wonder why it’s even in the game to begin with. Pressing a single button makes Yooka perform a spin attack that can deal with most enemies. As the game progresses you’ll need to unlock new moves to tackle more advanced baddies, but it’s nothing that will ever prove too stressful. Unless you have to attack at range because…well, you know.

These new moves aren’t just useful in combat – you’ll need them to collect the Pagies required to continue through the game. Collecting the (literally) thousands of Quills scattered liberally across the various game worlds allows you to buy new moves off Trowzer, a snake trying to run a business of selling moves to people. These moves allow you to complete various puzzles and venture into new areas of the hub world – Hivory Towers.

Rather than a more standard type of progression, Yooka-Laylee ties its progress to a strange, interconnected hub world where simply finding the portal to the next level is a challenge. It doesn’t take many Pagies and Quills at all to unlock the worlds and special moves you need to progress, but finding the next Grand Tome that acts as a portal to another level can be an incredible pain in the arse.

You’ll spend ages platforming your way from one end of Hivory Towers to the other, only to realise that all you’ve done is unlocked a shortcut back to the start of the level rather than found a new Grand Tome. As a result, there’s no real ending to each of Yooka-Laylee’s five worlds and no real satisfaction in clearing the puzzles and tasks in each. There’s a boss fight in each level, but they’re not mandatory in any way.

They’re also not very enjoyable at all. The boss encounter on the first level sees you having to roll up a hill while an angry wall tosses logs at you. When you hit these logs, and you will hit them thanks to Yooka handling like a Mini Cooper driving across a sheet of ice with the turning circle of an Aircraft Carrier, you slide back to the bottom to start all over again. There’s nothing particularly enjoyable about clearing these puzzles. 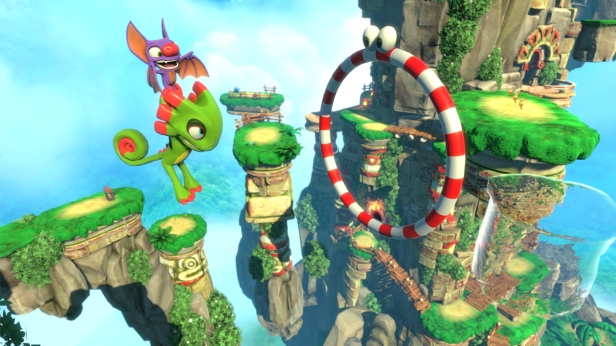 There’s no real sense of accomplishment or satisfaction in besting a particular challenge or figuring out how to get from one place to the next. You get a Pagie with very little fanfare and then move onto the next dull chore. The best you can hope for is something pedestrian or mundane. Many of these sections can be downright abysmal . Playing through Rextro’s awful retro minigames with even worse controls than the main game springs immediately to mind.

Or any of the transformations in the game – that see Yooka and Laylee combined into some kind of plant, vehicle or other abomination that is, again, even worse to control than normal. Or the quizzes that take the place of actual boss battles – tasking you with remembering the thoroughly unmemorable characters, locations and events from the game. Yooka-Laylee tries to play that last one off as quirky, even going so far as having one of the characters point out how lazy and arbitrary a memory quiz in place of a boss fight actually is.

Trouble is, pointing that out doesn’t automatically make it not lazy, it just makes you acutely aware of how lazy it is. Yooka-Laylee is full of jabs at other games and genres, all of which fall flat because the game itself isn’t very good. And if you can somehow put up with all of that, the “voice acting” will probably be the thing that causes you to run screaming from the game. Yooka-Laylee pulls the same trick many older platformers did with its characters’ voices – rather than have them speak words, their dialogue is accompanied by noises.

Rather than a couple of grunts or whatever, Yooka-Laylee decides the best thing to do is find the most obnoxious, aggravating sounds it can and play them for each and every syllable. It can’t be turned off (unless you want to turn off all of the sound effects in the game) nor can a lot of it be skipped. You just end up sitting there, listening to a cacophony of grunts, hisses, barks and whatever else the game can think of to annoy you into wanting to do anything else with your time. 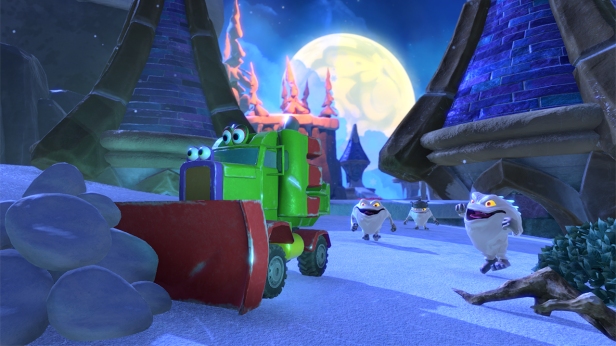 It’s not even like the story matters. You have to collect all the Pagies before…well, nothing? It’s not like Capital B seems particularly interested in collecting the Pagies himself. Although he is more likeable than your bat companion Laylee, who’s an utter, unrepentant bully. For real – he spends most of his time making what I think are supposed to be funny side remarks about most characters. They’re not funny. They just make him look like the total dickhead he is.

As a backer of this game on Kickstarter and someone who has fond memories of the genre it looks to revive, I really wanted to like Yooka-Laylee. I don’t. Instead of taking a beloved style of game and updating it for modern times (à la Doom last year), Playtonic essentially created a game that could have been from 1998 and released it in 2017. The result is a mess of poorly implemented game mechanics that the games industry fixed two decades ago.

The camera is nigh on uncontrollable, the movement is clumsy, the combat is so slight that it barely registers and the puzzles, challenges, minigames and environmental platforming range from “thoroughly mundane” to “why God, why?” Gameplay aside, Yooka-Laylee is a tour through some stock platforming levels with some truly detestable characters, a paper-thin plot and no real reason to keep playing.