2017 has finally seen the newest entry of the Sci-Fi Action RPG giant Mass Effect series, Mass Effect: Andromeda. A somewhat troubling development cycle and some big staff changes had many worried about the quality of the game pre-release, and personally I couldn’t wait to find out if that worry was justified. In all honesty? Mass Effect: Andromeda is a fantastic game, unfortunately one that’s bundled with a few hefty faults. Please be warned, there will be some unavoidable spoilers ahead. 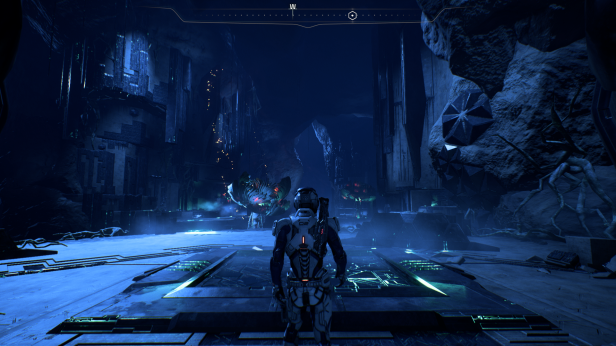 In the Mass Effect timeline, somewhere between the second and third game, the events of ME:A begin to unfold. Broadly speaking, the Citadel races have decided that the Milky Way is not enough, and send four arks (each human, Salarian, Asari and Turian ark holding 20,000 citizens) on a six hundred year journey to colonise the Andromeda galaxy. Their mission? To explore strange new worlds, to seek out new life and new civilizations, to boldly go where no- well, you get the idea.

Although the previous instalments have had some severely obvious influences from Star Trek, ME:A takes this inspiration a whole lot further.  Whereas the focus of the original trilogy was much more military in nature, ME:A puts you in the role of the lead explorer (“Pathfinder”). Your role is to evaluate the sector and find your community a permanent home in Andromeda; unfortunately, there are certain unforseen obstacles in your way. 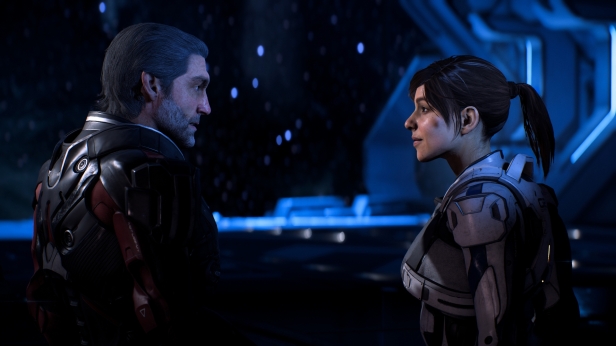 Upon arrival, your thrust into a deadly encounter called The Scourge – a galaxy-spanning phenomena resembling a giant space jellyfish plant fungus thingumy. The Scourge has had a dramatic effect on the galaxy, rendering entire planets uninhabitable and playing havoc with generally everything as a whole. On top of this, your first contact does not go smoothly, and along with the environment trying to kill you, you’re also presented with a new alien threat, ready to extinguish the only Milky Way lifeforms within 2.5 million light years.

A cheerful welcome this ain’t. You have your task ahead, warts and all. All that’s left is the game itself. At first, it feels like we’re on particularly familiar territory. The relations between humankind and the rest of the Citadel races seem so close to that of the first couple of games that if you’ve spent a considerable amount of time in the original trilogy it can be jarring, depending on your choices. 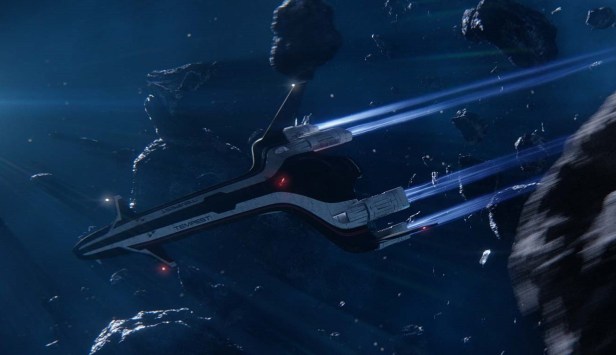 I felt there was a rather excessive similarity to the first game in the series in all honesty, to the point where it was off-putting at times. For a start, it seems that all state-of-the-art space craft have the same engineers. Secondly, the team building – always a core aspect of the Mass Effect series – seems forced in ways. Certainly not always, but some characters seem to jump on board without real motivation.

The characters that make up your team will always make up the heart of any Mass Effect game, as their relationship with you and their reactions to your decisions will determine how you feel about your own character. In this respect, Andromeda almost manages to transcend the borders between expectations and reality, however there are some of these important characters which just don’t strike the right emotional or personal notes. The same can be said for the bulk of the inexplicably-accented NPC’s. 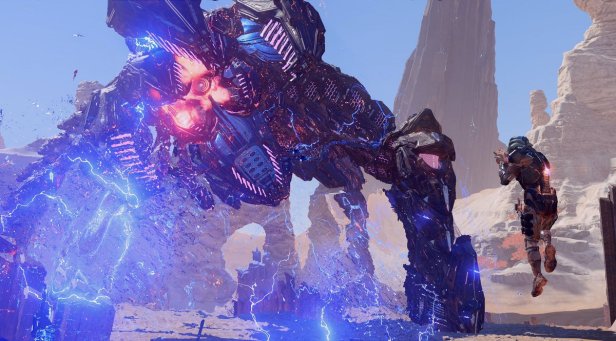 While it’s nice to have a varied voice cast, there has to be a better way to provide diversity without having various Australian/regional UK accents popping up randomly. Aside from that, a lot of the time I felt that there wasn’t a great deal of reasons for a lot of characters to behave as they were. That being said, that doesn’t mean that ME:A doesn’t have a great deal of emotional punch, just that said punch misses the mark with noticeable frequency.

One part which does feel like a solid improvement, however, is your player character. As much as I didn’t think I’d say this, Ryder is a much, much better protagonist to play as than Shepard.

With Shepard, we’re coerced and railroaded into a paragon/renegade style. We’re rewarded for going to the extremes. Ryder feels a whole lot more human – without the constricting moral boundaries, you’re allowed to play the entire grey area offered by the human conscience. It’s never highlighted that you’re making a decision like a saint or a bastard, it’s just… natural. It’s one of my favourite aspects of the game. 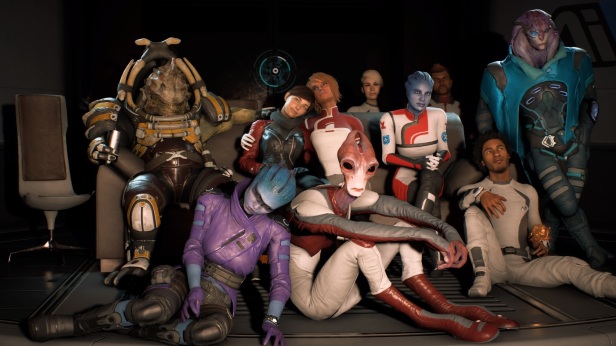 Your conversational choices seem so real and so natural that I didn’t pay much attention to the indicators showing whether they were flirty, intellectual, emotional or casual, just what the words said. And that was a fantastic thing to feel, that kind of empathetic flow that helped me feel what every character was feeling. Regardless of their sometimes ambiguous motivation, the interactions felt real and that is a massive plus for the game.

The rest of the gameplay is very Mass Effect. Your combat is unchanged in terms of functionality and feel. Although there’s a tactical element lost in terms of control of your teammates, this is countered by the very tactical real-time combat profile system. In Andromeda, there’s a pretty nifty development cycle – instead of limiting your choices to class with your player character, you can freely distribute XP points as you feel, to whatever skills you like. 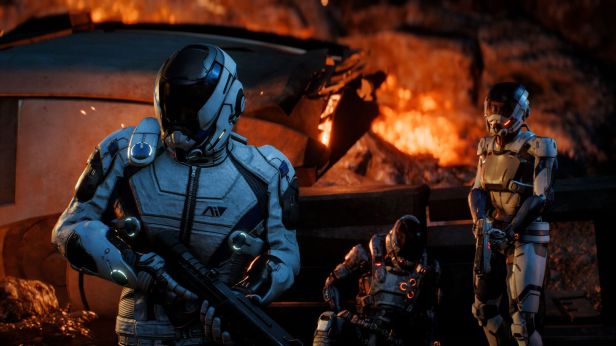 In doing so, you unlock certain switchable profiles – meaning your character can adapt to most situations, making these tactical choices personal rather than squad-wide. This also means that once you have every team member at your disposal, you have a huge range of approaches to the combat. Unfortunately, the combat is very rarely challenging. While there is a great feel to the action elements of the game, there were few and far between moments where you feel truly threatened.

This is another point of contention with Andromeda. There is a reduction in the feeling of urgency. While your mission is always emphasised, the amount of side quests is simply overwhelming. Your overall progression is gauged in terms of habitable viability, and it’s never made clear which missions are important or not. While one could argue that each task is well written, well defined and none feel pointless, the truth is that once a certain region maxes out in viability, there’s little point in continuing their respective side missions, aside from flavour. 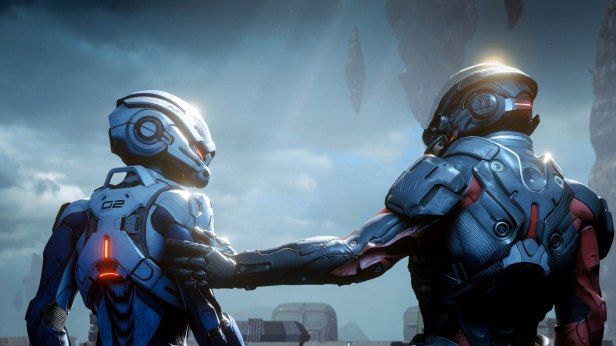 While it’s brilliant that you’re not pressured into completing every little thing thrown your way, it’s also tedious in that you can’t really distinguish until late game which are actually worth the time investment after a certain point. That much is entirely down to how much of the mostly average, repetitive combat you can handle and how much you want to interact with the seemingly endless amount of individual NPC’s.

Their personalities and stories are all interesting and varied, and for me personally that was a plus but I can completely understand how they would be a touch too much for others when their overall importance is diminished by your previous progress. Although I had some hard crashes at certain points, I’m sure this will be patched out and fixed, and your experience may vary, it’s a sad state of affairs when this kind of fault is expected. Thankfully, viewed on the whole, these flaws don’t wholly detract from the entire package. 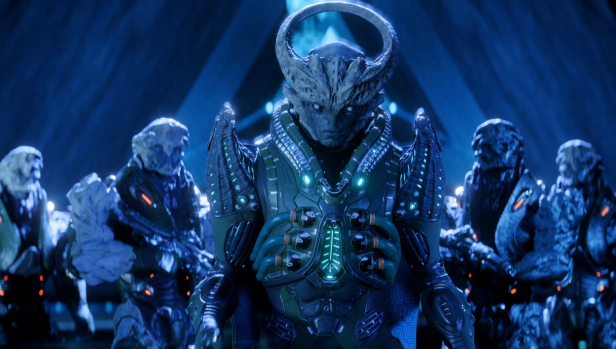 The cinematics are great, there is some real hilarity in places, the MAKO-esque Nomad is thankfully quite a lot of fun to bounce around in. The real issue comes in that Mass Effect: Andromeda doesn’t do nearly enough to distance the experience from the original trilogy; this could have been something really special, but in the end the ME:A we were delivered was simply more Mass Effect.

There are so many conflicting elements of this game – the animations are shoddy, but the experience is fantastic. The combat is exactly average, but still great fun. The voice acting is strange, but believable for the most part. The relationship structures do and don’t make sense. The emotional punch aimed at your jugular hits while also missing spectacularly. What we have here is a game that can’t decide who it wants to please, and I have to be a hundred percent honest – if I were reviewing this game as Tom Q the Mass Effect fan I’d be raving.

But I’m reviewing this game as Tom Q the critic and it’s a mess. A glorious mess, and one well worth taking a chance on but the faults are too much to ignore. What could have been a masterpiece is simply a great game worth playing if it’s your kind of thing. But there are enough elements here to promise a sequel. If that’s enough for you to invest your time, by all means do so. I’m here for the long run, and as Tom Q the fan, I urge you to join me.