Has Been Heroes is a lane-based, roguelike strategy RPG that focuses on a crew of old, retired fantasy heroes who have been summoned by the King for one last epic quest – escort his daughters to school. The old, out of practice adventurers need to make a perilous journey to the faraway Academy, a journey made infinitely more difficult when the Great Ghoul summons an army of undead in an attempt to take over the world. 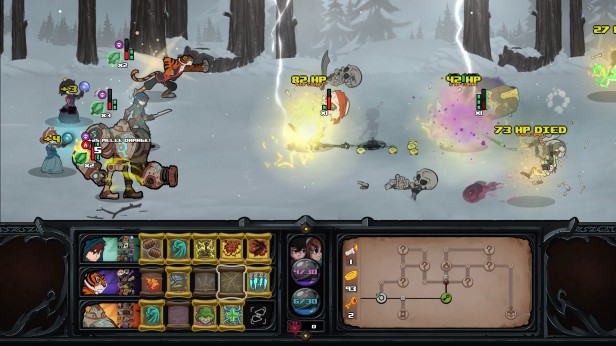 Has Been Heroes is a very strange game. It has some excellent core gameplay mechanics, taking quite a unique approach to the strategy RPG genre with its lane-based combat. It also has some very change design choices and restrictions on those mechanics that end up making the whole thing feel as frustrating as it does rewarding. Rather than balancing out and being a solid game, Has Been Heroes swings wildly from one extreme to the other. At times it’s incredibly satisfying. Other times it’s endlessly frustrating.

The core of Has Been Heroes revolves around lanes. In combat, your three protagonists perpetually move forward in three different lanes, with enemies rushing towards you in one of these three lanes. The game then piles on layers of mechanics to create a complex, highly strategic style of combat. It takes a long time to get to grips with – all of these different mechanics result in an intensely complicated game that I’m going to try and do my best to explain in as succinct a fashion as possible. 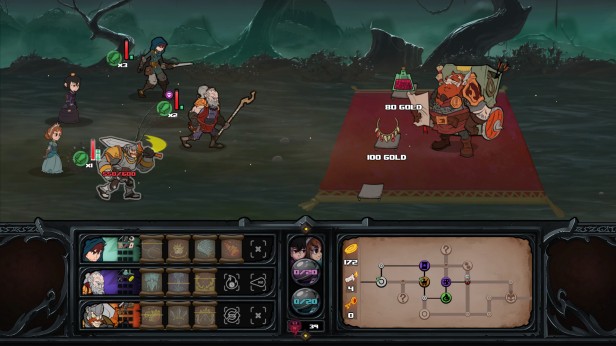 The three heroes you start with fit into three different classes. There’s the warrior who attacks once per turn for massive damage, the mage who attacks twice for less damage and a rogue who can attack three times for medium damage. Number of attacks is important as most enemies have stamina points that must be drained before they can take damage. If an enemy has two stamina points, hitting them with two attacks will stun them, allowing you to follow up with a different character for big damage.

You’ll need to become adept at swapping characters between lanes to create combos, using one character to set up a follow-up attack from a second. You’re only able to swap a character into a lane when they’re attacking, so forward planning is essential to make sure you’re hitting enemies. It’s a system that takes some time to get used to, and to be honest I never felt wholly comfortable with the controls. Luckily you can pause the game at any time to get your bearings. 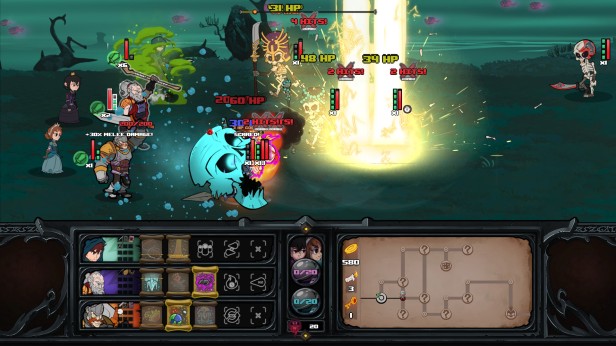 It’s overwhelming. There is some satisfaction to be had with the game when you’re lining up combos and sending skeletons flying all over the screen, but you’re far more likely to be screwed over by having your characters heavily out of position going into most fights. Characters’ positions will be set based on your previous fight. Going into a new fight you’ll probably see exactly how you could maximise your damage output, only to realise that you can’t shuffle your heroes about effectively enough to actually do that.

And once you’re overwhelmed by a horde of skeletons the roguelike elements of the game kick you square in the face all the way back to the main menu to start again. It quickly becomes tedious. Your characters that aren’t decked out in massive armour will die pathetically quickly, sometimes in a single attack. Spells can help enormously, but it’s a toss-up as to whether you’ll find anything helpful in your travels and, thanks to a heavy reliance on randomness, you’ll probably equip them to the wrong character anyway. 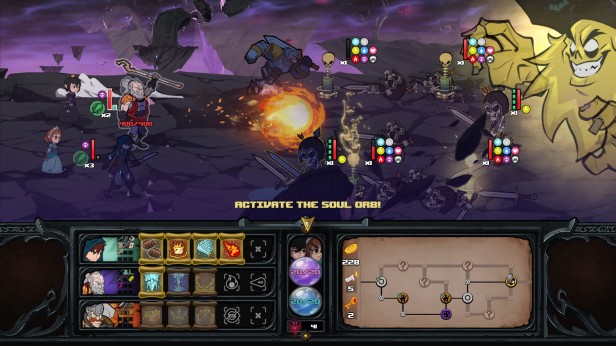 Has Been Heroes has a huge problem with artificial difficulty. There’s a satisfying game buried deep underneath the mess of complicated mechanics, but this is a game that goes out of its way to be as obnoxious as possible. Boss fights are the best example of this – going out of their way to make a mockery of the gameplay mechanics you’re already grappling with. One boss will switch lanes when knocked back, rendering attempts to set up combos irrelevant.

Another spawns obstacles that need to be smashed, as well as never ending waves of enemies that need to be dealt with, making getting anywhere near him a thankless grind. A needlessly cluttered UI doesn’t help matters. As the number of enemies grow it becomes difficult to even see vital information, such as how many stamina points a bad guy has, because they’re all standing on top of one another, obscuring the information you need to actually be competent at the game. 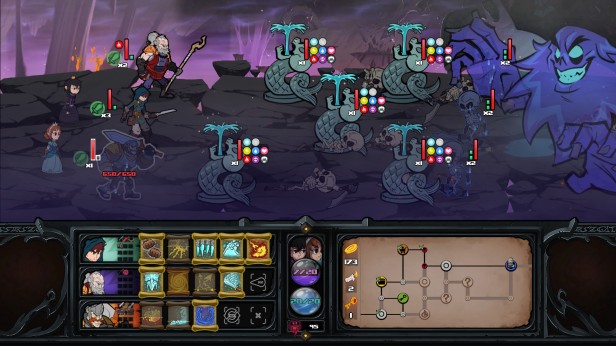 Your first half-dozen runs are merely practices, trying to figure out how the game’s basic mechanics work. Once you’ve got enough of a grasp on those to survive more than one or two battles, you’ll have to grapple with the traversal system. Has Been Heroes features a similar world movement system to Hand of Fate – you need to plot a path towards the end boss through a series of unknown locations. Hidden throughout are battles, vendors, treasure chests, empty spaces and more.

The movement system itself works fine, although the game punishes you for moving backwards, which seems a little out of place. You basically need to cover as much ground as possible, grinding your way through battles to gather up gold to buy items and spells and souls. Difficulty spikes abound in Has Been Heroes, so any battle space you hit could potentially be your last thanks to poor positioning and swarms of skeletons. But buying items is necessary and you’ll need as much gold as possible to do so, so it’s a case of gritting your teeth and bearing it out. 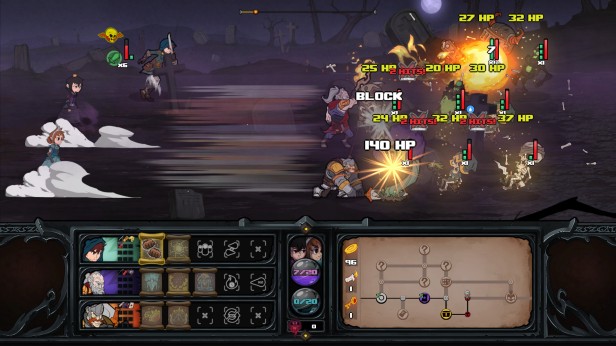 The reason you need to buy so many items and spells, apart from their obvious uses in combat, is because you don’t know what they are until after you’ve purchased them. In a baffling design choice, when you’re buying a brand new spell or item for the first time the game doesn’t actually tell you what it is. You have to select a hero to equip it to and basically rely on the Gods of chance to hope that it’ll actually be beneficial to them (it can’t be swapped to someone else).

Only by purchasing it will you unlock its description, which will be available for future runs, meaning the more you buy the better chance you’ll have of being able to actually optimise your party in future runs. I can’t fathom why the game thinks this is a good idea, except to add unneeded layers of obfuscation to itself and artificially heighten the difficulty of the game even more. 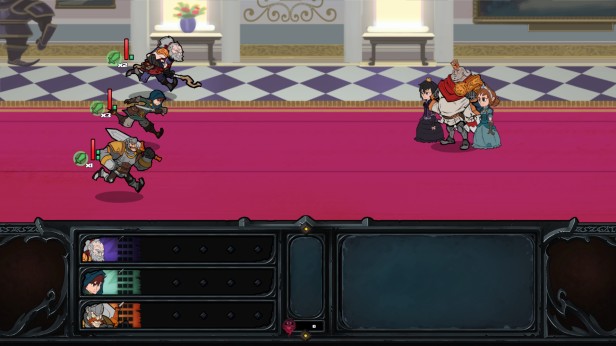 In the end what makes Has Been Heroes a truly forgettable experience is repetition. You’ll constantly be killed by forces outside your control, forced to re-run the same levels over and over again. It doesn’t help that the game only has one enemy type. Skeletons. There are different types of skeletons, but that’s all the game throws at you. The “story” ends after the amusing setup of being called upon for a school run. From there it’s basically just a case of watching your heroes charge forwards and die constantly, which offers no help in alleviating the sense that this game is simply wasting your time on frustrating monotony.

Has Been Heroes is an ultimately frustrating game. There’s the core of a great idea here with the lane-based strategic combat. Unfortunately developers Frozenbyte have piled on too many complicated systems for it to ever feel fun. Its user interface is clunky and unhelpful, and the implementation of some of its roguelike elements is actively off-putting, only serving to make the game feel tedious as opposed to challenging.

It takes many hours to actually figure out just what the heck it is you’re doing in Has Been Heroes, and chances are by the time you’ve gotten to grips with it you’ll realise you’re just not having any fun playing the game. There are very brief moments of satisfying gameplay here, but they’re outweighed by a game whose mechanics often feel at odds with each other.