Styx: Shards of Darkness is a stealth game starring everyone’s favourite shit talking Goblin, who sets off on a new adventure filled with sneaking, swearing and more Goblin puke than you might think. While earning a living as a thief in Thoben, Styx is approached by the leader of the Goblin hunting organisation CARNAGE and offered a job to steal a sceptre. When the sceptre is swiped by a mysterious individual, who tries to kill Styx in the process, the protagonist is swept up into a larger story of alliances and betrayals.

As much as I’m going to pains not to give too much of the story away in the opening paragraph, the truth is that it really doesn’t matter all that much. The game continues using the world of the previous Styx game, complete with Elves, Humans, Dwarves, Orcs, Goblins and more high fantasy tropes than you can shake a stick at. There’s plenty of story and lore to uncover throughout the game, and the game does a fun job of occasionally putting some slightly different spins on the tropes that it uses, but it’s not a particularly interesting world.

And it doesn’t matter in the slightest thanks to the tiny talking Goblin at its core. While the game definitely would have benefited from having a stronger core narrative, Styx is awesome. While his supporting cast range from bland to awful (with voice acting to match), the titular character himself is a wise-cracking, sarcastic, fourth wall breaking delight. Seeing him interact with an otherwise po-faced, serious fantasy world by generally giving it (and you) the middle finger is constantly a delight.

Being a four foot tall Goblin armed only with a dagger (and some nifty equipment and abilities), Styx lends himself really well to stealth. Shards of Darkness is a pure stealth experience. The option exists for open combat in the game, aside from a few mandatory stealth sections, but he doesn’t really lend himself well to combat at all. It’s a pretty awkward affair, with Styx able to parry attacks with a well timed button push. But it’s incredibly poorly implemented.

Possibly on purpose. Rather than acting as another viable option, combat in Shards of Darkness  is more of a warning – don’t try this at home. The game does all it can to push you towards using its incredibly robust stealth mechanics. Honestly, it’s a great decision. As a stealth game Shards of Darkness is a finely crafted blend of systems, mechanics and level design, tied together in a package that’s pretty satisfying to play through.

The crown jewel of Shards of Darkness’ gameplay are its massive levels and the myriad of ways you’re able to traverse them. Each mission features two or three expansive areas for you to explore, with multiple paths through them. If you hit a wall trying to sneak through an area one way, chances are you’ll be able to explore around a bit and find another three paths through the same part, giving you a great feeling of ownership over how you make it through each of the game’s nine missions.

There are so many options for getting around. As well as the obligatory crouch-walking, Styx can run, jump, climb, slide down ropes, crawl through small holes and make his way through levels in a huge variety of ways. Such a varied suite of options helps keep the slow-paced gameplay fresh, as you’ll generally be switching up your approach on a very regular basis. Though the jumping can be a bit hit and miss, making easy jumps occasionally feel like leaps of faith. It is nice that platforming requires user input and Styx doesn’t do it all automatically, but that also comes with the infuriation that you will miss jumps that should have been easy from time to time.

Getting through these levels isn’t as easy as just platforming, of course. Enemies routinely block your path. While their AI isn’t the greatest, if you cross their line of vision they’ll spot you in a hot second, meaning you’ll need to constantly be on your toes. Every level sees Shards of Darkness up the ante with new enemy types that change the way you’ll need to approach the game too. Elves with heavy armour that can’t be killed with Styx’s dagger, bugs that can’t see but react to sound, Dwarves who can smell Styx if he’s nearby and more are ready to really ruin your day.

Luckily Styx has an impressive suite of gadgets and abilities to get him through levels. Chief amongst them are his amber-fuelled powers, which allow him to turn invisible for brief periods of time or even create a clone to use as a distraction. Upgrading them through Shards of Darkness’ skill trees can make them more powerful and even give you more options in how you use them. If that’s the direction you want to go in. 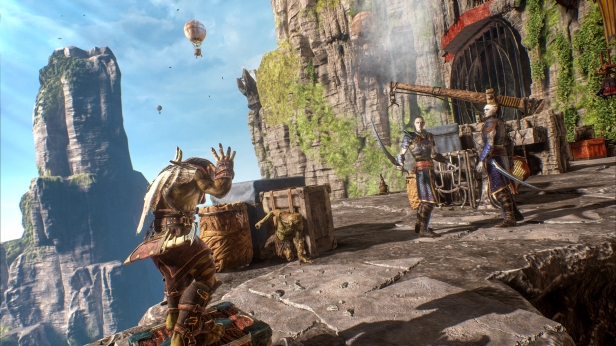 You can throw skill points into crafting better equipment, for example. Styx starts with the ability to create bolts that can be used to kill enemies at range. Investing in the Alchemy skill tree will expand your equipment to include a multitude of useful items. Including the always satisfying acid traps. There are five skill trees in total, each filled with skills to enhance different aspects of gameplay. The game isn’t shy about allowing you to customise Styx to fit your play style.

Better still, you’re able to learn and unlearn skills at will. Provided you’re at a skills table, which you’ll usually find prior to starting each mission, you can choose to unlearn a skill for a full refund of the invested skill points. If there’s a skill you aren’t finding particularly useful, or you need some points for a different skill, it’s a painless procedure to chop and change. It’s an awesome idea – with Shards of Darkness giving you maximum flexibility in tailoring your experience.

As is becoming more and more common with modern games, Shards of Darkness features drop-in, drop-out cooperative play. All of the game’s missions can be played with a friend, who’ll take on the role of a Styx clone. It’s a great way to play Shards of Darkness, provided you’re playing with someone you’re communicating with. Twice the number of players means twice the number of ways you can get through a level, but it also means enemies are twice as likely to be alerted if someone messes up.

Styx: Shards of Darkness is a great stealth game. While its story, characters and voice acting are all fairly poor, but the game more than makes up for this with some solid core gameplay and a fantastic main character. Styx’s sarcastic, dry and often fourth-wall breaking humour are a standout delight from start to finish. Especially when he’s berating you for getting him killed in Arkham-style death screens.

What makes Shards of Darkness a great game, however, are the various gameplay mechanics and systems. The game gives you multiple paths through each of its expansive levels, with dozens of ways to interact with the environment and a great variety of abilities and items to put to use. There are also enough options here to really tailor Styx to your play style, allowing you to play to your strengths. Everything comes together to create a really great stealth gameplay experience.