Sniper Elite 4 is the latest third-person, tactical stealth shooter in Rebellion’s series, once again casting players in the role of OSS agent Karl Fairburne in his mission to kill every single Nazi, one bullet at a time. This time around the action takes in place in 1943 as Fairburne is tasked with assisting the Italian resistance to the Nazi occupation of their country, uncovering plans for a German superweapon that could fundamentally tip the scales of the second world war.

Sniper Elite 4’s core gameplay loop is about phases. Each level is massive, littered with objectives that range from assassination to sabotage to rifling through desks looking for evil Nazi paperwork. These levels aren’t quite as open as the game tries to convince you they are. Don’t get me wrong – they’re vast, with huge sightlines and multiple paths to completing your various mandatory and secondary objectives utilising a variety of approaches.

But they’re also built in sections. Each level features a string of areas with paths that connect between them, with each of these sections housing one or more of your objectives. Generally you’ll be dealing with objectives, at most, two or three at a time. Only the very occasional tank, truck or wandering patrol will actually move between these sections. They’re hidden quite well thanks to game design that feels more open and dynamic than it actually is, but it’s there all the same. 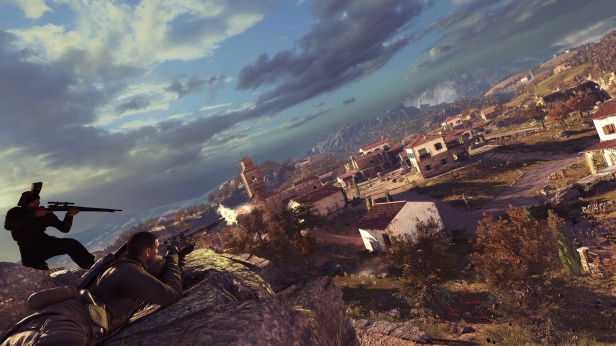 In truth, this is actually one of Sniper Elite 4’s strengths. There’s an addictive quality to this game’s gameplay loop. Each time you approach a new section of map you’ll be identifying enemies, using your trusty binoculars to tag them, which allows you to keep track of them a lot easier. Then you need to figure out how you’re going to take care of these enemies, either killing them all or sneaking around them, and accomplish your objectives at the same time.

Thanks to these larger maps and the huge range of weapons and equipment at your disposal, you’ve got a lot of options to choose from. Sniping is obviously the star of the show. Other tactical options involve up-close stealth kills or luring enemies into traps comprised of trip mines, TNT or a bevvy of explosive options. Running and gunning is even an option, albeit a difficult one. It’s perfectly viable to take on Sniper Elite 4 as you would another, more action packed World War 2 shooter. 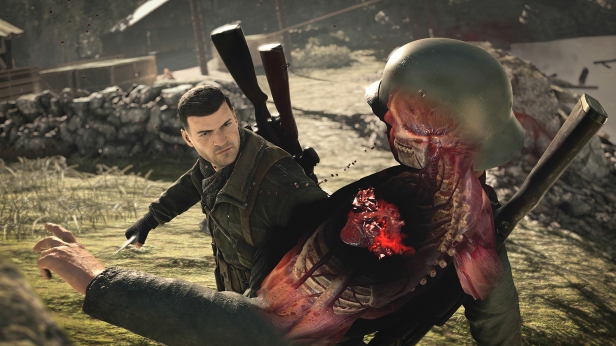 The chances are, though, that you’ll find yourself engaged in a mixture of gameplay styles depending on the situations you face. Sniping is incredibly satisfying, but sometimes sneaking past enemies to get to specific vantage points is your best bet at success, for example. Some approaches are more difficult than others, but all of them are satisfying to pull off. Though there are some approaches that are much more satisfying than others.

A special mention has to go to stealth. Sniper Elite 4 is a deliberately slow-paced game. Each of its eight levels can take up to two hours to finish successfully. There will be moments during this game where you’ll find yourself crouched in some foliage, waiting for an opportunity and not doing much, for minutes on end. Where other, more hyperactive action games do all they can to avoid such situations, this is Sniper Elite 4’s bread and butter.

It’s the game’s approach to stealth that makes it a fascinating and incredibly satisfying game to play, with an exhilaration in clearing out each level’s Nazi population few other action games can match. Stealth in Sniper Elite 4 isn’t about ensuring that no-one knows you were there, it’s just about never being caught. You can cause absolute carnage and mayhem in a Nazi base. The trick is making sure the Nazi’s don’t know where you are. Sound masking plays a huge role in this.

Some levels will have planes making occasional passes overhead, or feature a huge cannon that fires periodically. Crafty players can time their sniper rifle shots to coincide with these noises, which will successfully mask the explosive sound of a Springfield rifle firing. While the surviving enemies will know you’re there somewhere, they won’t have a clue where the shot came from.

This is Sniper Elite 4’s most engrossing mechanic. It shifts the paradigm of the gameplay away from taking down your enemies as fast and efficiently as possible. With sound masking, you’re setting up your shots and waiting for the opportune moment to strike. There were fewer more satisfying moments that I personally had than, following about an hour of slow-paced stealth, finding a generator next to a balcony overlooking my final objective.

I felt a great amount of catharsis in sabotaging that generator, creating a soundmask, and laying waste to the Nazi’s below me. The big problem with Sniper Elite 4’s eight levels is that environmental sound masking is only really an option for about half of them. When it’s not then the game can sometimes get bogged down. Those generators you can find are few and far between, and without sound masking the sniping itself can be inadvisable.

When sound masking is present it feels like an indispensable part of the gameplay experience. When it’s missing, it feels like a core mechanic absent. The truth is that it’s just not as much fun to do anything other than sniping in Sniper Elite 4. Sneaking around levels, finding vantage points, picking your shots – these lead to all the great moments in the game. Too often, however, the game funnels you away from its strongest element. While this is a necessary trade-off in making the game’s levels more open and less scripted, it can make some portions of the game feel like a chore.

The hit and miss nature of the game’s AI doesn’t help matters. In some areas they’re deviously excellent. They’ll often attempt to flank you, they’ll cover your position when they think they know where you are, send a single soldier to check while another 10 have machine guns pointed at you, and they’re really quick notice if you’ve silently taken out a member of their squad. One excellent gameplay mechanic sees them bolstered by the presence of officers. They’ll fight harder and better in their presence, and become shaky and panicky if you blow his brains out.

They’re also prone to running into walls from time to time, way too easily distracted by noise to the point that throwing a rock will see all of them scurry towards the source of the sound. Which makes it incredibly easy to manipulate them towards an explosive death. Sometimes clearing out otherwise tricky groups of enemies is as simple as throwing a rock against a truck, watch them all run towards it and then blow them all sky high. At one point a Nazi threw a grenade up some stairs, watched it roll slowly back down and didn’t move in time to avoid it killing him.

Movement can also be tricky thanks to an automatic cover system that can sometimes see you get stuck to the ends of walls and other cover. These issues are present and noticeable, but they don’t take too much away from how fun and satisfying Sniper Elite 4’s core gameplay loop is. This is an engrossing game from start to finish thanks to the strength of its mechanics, the variety of options at your disposal and the openness of its levels.

Although I do have to talk briefly about the game’s voice acting. Sniper Elite 4 features a fairly standard World War 2 storyline – Nazi’s are bad, they’re doing bad things and it’s up to you, as a one man army, to stop them from winning the war. It’s bland, but it gets the job done, allowing you to move from locale to locale. Most of the Italian accents in this game, however, are delivered by a voice cast that seemingly learned the accent from Super Mario Bros, which is as hilarious as it sounds, though it does completely break any immersion the story may have otherwise had.

Outside of the single-player campaign, Sniper Elite 4 also comes with a decent spread of multiplayer options. The best of these is co-op, allowing you to team up with a buddy to play through the entire campaign as a two man army. The game also features co-op survival, with an asynchronous mode that puts one player in the role of spotter and the other as the sniper, which can be a lot of fun to mess around with.

Competitive multiplayer is pretty decent as well, doing a good job of transferring the core gameplay of Sniper Elite 4 into a PvP environment. You’ll find the standard mixture of deathmatch and team deathmatch, as well as No Man’s Land, my personal favourite of the multiplayer modes. This match type sees two teams of four duke it out in the ultimate sniping contest, as the teams are placed on opposite sides of an impassable stretch of land, forced to engage each other in long range combat only.

Sniper Elite 4 is a solid stealth action game. While it has some issues with AI, set piece design, movement and a woeful underuse of its fantastic sound masking mechanic, it makes up for these issues by delivering an engrossing gameplay loop. As you might expect, sniping is the most entertaining way to play the game, whether you’re pulling off a tricky shot, executing a plan to perfection or scoring a troublingly satisfying X-Ray killcam (and seeing a Nazi’s testicles explode in slow motion). Though the game also deserves praise for the huge number of alternative options at your disposal, which plays into the excellent level design that does a great job letting you put these options to use.