Titanfall 2 arrived without any of the overblown hype of its predecessor, which may have been the first victim of the ridiculous overhype that seems to have taken hold of AAA game releases in the current generation. I bring this up because, ironically enough, it’s Titanfall 2 that largely delivers on the excitement and anticipation many held for Titanfall. In a year of surprisingly excellent first-person shooters, Titanfall 2 is perhaps the most surprising of them all.

While I was one of the few that argued that Titanfall didn’t need a campaign, merely a more robust suite of content to truly succeed, Titanfall 2 proved me wrong in the best way imaginable. It offered a narrative that somehow made me care about BT, the Titan that is paired with protagonist Jack Cooper. While the meat of the game sees you embark on a standard “stop the bad people from doing bad things” story, the deepening relationship between man and machine proves powerfully compelling.

This is all housed in a campaign that is purpose built for the exhilarating movement abilities and core gameplay mechanics that make their way from the first game. As a Pilot, you’re able to move swiftly through the battlefield, with access to skills that allow you to easily outclass your enemies. Parkour, wall running and double-jumping are all present, with Respawn crafting some amazing levels that combine these abilities with Titanfall 2’s slick shooting mechanics. 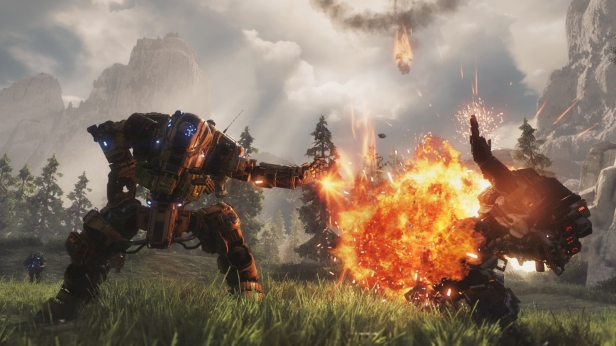 Respawn have really put on a masterclass in level design here. Combat combines shooting and movement into a series of set pieces that are vastly different from other shooters in 2016. It’s the combination of these mechanics that truly make Titanfall 2 come alive and feel new. The game also features lengthy breaks from the combat to tackle environmental puzzle solving geared around your impressive movement abilties. And when all else fails you’re able to engage in some excellent robotic combat with giant death machines, which is always heaps of fun.

Titanfall 2 also carries on the tradition of excellent multiplayer. This time around, Respawn have packed the game with a variety of modes and a more robust series of unlockables. The multiplayer itself remains largely intact from the first time around, combining fast-paced, on-foot combat with the ability to call down Titans as the match progresses, recalling Titanfall’s fantastic, asymmetrical deathmatches superbly.